In the world of challenge events there’s nothing bigger than the London Marathon and in recent years, the Virtual London Marathon. A chance for individuals to participate in one of the most iconic races in the world, but on their own terms. A challenge to walk or run 26.2 miles on a route of your choice during a set 24 hour period is something that SolarAid supporter Steve jumped at the opportunity to do.

“I am 62, and used to run a lot – half a dozen London Marathons in the 80s & 90s, but all the running stopped when a family appeared on the scene, so nothing since, not even running for a bus. Now we have a dog, and this year I have been keeping track of the miles I walk, aiming to do 1000 miles in a year. When the SolarAid appeal for marathon runners arrived, I thought I might be able to walk the distance rather than run it.” 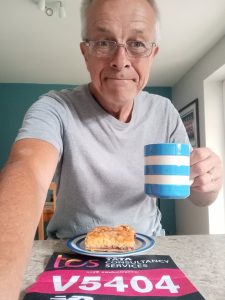 Steve on the morning of his Virtual London Marathon.

Met with some scepticism at first, Steve’s friends and family“after a couple of long-ish practice walks, they realised I was serious.” Undeterred, Steve planned his 26.2mile long route, which proved a great success come marathon day.

“I planned a route from my house, about six miles outside York, into the city, out again on the other side, and then back. Fortunately, the weather was kind, mostly sunny, and the time went surprisingly quickly. The marathon app which recorded my route gave me the 26.2 mile fanfare about 200 yards from my house, so it wasn’t too far to go before tea and cake were in front of me. Maybe sitting down for half an hour was a mistake though! Getting up again was the hardest part of the day.”

This is not the first time Steve has taken on a marathon for SolarAid, but the first was of a different kind!

“I first came across SolarAid when they had a stand at the Glastonbury Festival about 15 years ago, and kept in touch with what they were doing. In 2018 I raised money for them by playing & videoing a ukulele song every day for a year, a different sort of marathon.”

As an experienced fundraiser for SolarAid, Steve’s advice to anyone thinking of fundraising is to “Do it! Just remember how even the smallest amount of money raised can help a family get a solar light, and in turn get rid of a kerosene lamp, with all the health & safety problems they can cause.”

We’re so thankful for Steve’s support, taking on the Virtual London Marathon this year, and fundraising to provide solar lights to the most rural communities. If you’re thinking of setting up a fundraiser- please get in touch, we’d love to hear from you!

If you’re stuck for ideas we can also help with that too – spend a Night Without Light, write a book, or run an ultramarathon. There’s something out there for everyone! Get in touch and we will guide you every step of the way.