Forty degree heat, howling desert winds and 250 kilometres of endless sand dunes, the Marathon Des Sables isn’t for the faint of heart. This self-sufficient ultra-marathon across the Sahara desert is known as the world’s toughest footrace – and for good reason.

SolarAid supporter, Jon Cross, didn’t let the enormity of this challenge stand in his way. After deciding to take on the ultra, he chose to take it one step further to raise money and awareness for the 578 million people living in darkness in sub-Saharan Africa. 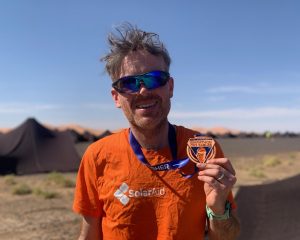 ‘I’m a middle-aged father of two. I ran the London marathon 20 years ago before various injuries took their toll but still ran around 45 minutes each day. Then my brother suggested we run the Marathon Des Sables together.’

With the start date looming and training fully underway, Jon began spreading the word about what he’d signed up for. He was met with a range of reactions but says many were ‘not too dissimilar to my own when my brother first mooted the idea; utter bafflement that I’d even consider it.’

However, undeterred and committed, Jon told his family and friends about SolarAid and found that ‘telling them about the environmental and personal ways the charity makes an impact is very compelling.’

Now that the race has finished and sand has stopped appearing everywhere(!), Jon can look back with fond memories of ‘stunning scenery’, ‘pushing yourself beyond what you thought possible’, and the ‘great group of guys in our tent’. These are memories sure to last a lifetime. 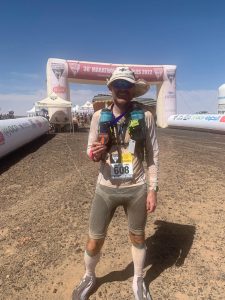 A real stand-out moment for Jon has to be finishing the longest day of the race, which in itself, is 84km. ‘I did the whole thing with my brother and we just hugged for ages while we recovered our breath. There may have been a tear or two.’

We are so thankful for Jon taking on the Marathon Des Sables to help end energy poverty. We can’t end the darkness alone, and our wonderful supporters like Jon bring us one step closer to ensuring every home, school and clinic has safe, clean light by 2030.

If you feel inspired to take on a challenge for SolarAid, then please get in touch. From selling ice cream on the streets of London to racing across the Sahara, our supporters’ strength and creativity never fails to inspire us.  We’d love to hear from you if you have any ideas!

Or, start your JustGiving page today. Together, we can End The Darkness.