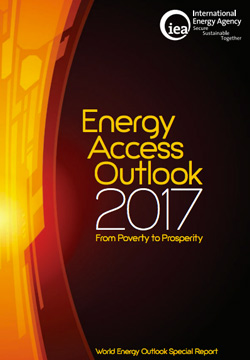 The IEA (International Energy Agency) has put together an excellent report which carries out a detailed analysis of the progress being made in creating energy access for the world’s underserved populations. The report recognises that ‘Energy access is the “golden thread” that weaves together economic growth, human development and environmental sustainability.’ Yet at the current rate of progress, 600 million across Africa will people will remain without electricity in 2030.

The IEA forecasts some good news: that the 1.1 billion people without access to electricity globally in 2016, should fall to 674 million by 2030. If that happens, that will be a great achievement.

However, the report also forecasts that, of the 674 million people without access, 600 million of those will live in Africa. That’s the same as today’s figures… and that’s a big problem.

The report rightly explains that energy access contributes to many of the United Nations Sustainable Development Goals (SDGs) including those related to gender equality, poverty reduction, improvements in health and climate change. SDG7 relates directly to energy access, however, with a goal to ensure access to affordable, reliable, sustainable and modern energy for all by 2030.

The report further highlights that “Energy for All” would provide significant benefits, especially for women, without having any impact on climate change

But the reality is, that at current rates of progress, the global community is heading for a big fail. It’s clear to us at SolarAid that it will be the hardest to reach people, living at the base of the pyramid in rural Africa who will be left behind under this scenario.

The report does see an important role for off-grid solar energy solutions in helping to address this problem. It goes on to estimate, however, that providing electricity for all by 2030 would require annual investment of $52 billion per year, more than twice the level mobilised under current and planned policies.

SolarAid is therefore calling for an immediate and significant step change in focus, innovation and investment, which needs to be specifically targeted at reaching people living in rural Africa. Without that, 2030 is going to represent a year of failure for too many.