Traditional Authority (TA) Kasakula’s headquarters is located in the central district of Ntchisi, Malawi. The road leading to his headquarters is long, rough, and winding, difficult to travel in the pitch black.  There are only three houses and two shops near his headquarters that have electricity. The rest of the village depends on alternative sources of light such as torches, candles and muyatso (burning straw). 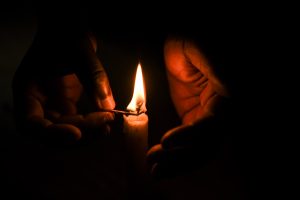 Traditional Authority Kasakula interacts lights a candle in his office which has no electricity at his headquarters on Thursday 29 April 2021. The chief uses candles when he has to work at night.

There are many reasons why many villages in this area do not have electricity, among them is the fact that applying for electricity is expensive. However, in the long run, alternative sources are costing villagers even more money.

“A lot of people are spending a lot of money buying torches and batteries for lighting at night. In addition, most villagers are having to walk a distance of more than 10 kilometres just to charge a phone, can you imagine how time consuming that is? In this day and age, no one should walk such a distance, no matter where they are in the world, just to charge a phone, ” said TA Kasakula. 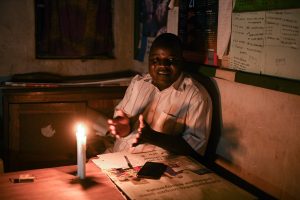 Traditional Authority Kasakulatalks to Sunny Money staff in his office which has no electricity at his headquarters on Thursday 29 April 2021. The chief uses candles when he has to work at night.

TA Kasakula wants to provide his village with easy to use, durable, and multiple operational solar systems to allow homes to have light at the same time in different rooms. He believes that with affordable solar light children’s grades will improve because they will be able to study at night. TA Kasakula also believes that solar power will help reduce accidents which happen as a result of using candles and muyatso. Every week, there are more reports of torch batteries bursting or a property burning leaving both children and adults affected.

Darkness poses many threats. From loss of study hours to loss to homes, the darkness is dangerous. Those without access to clean, safe energy are forced to choose expensive and often harmful alternatives to light their homes.