“When we use straw fire, we feel very anxious. We still do that, but there are complaints inside our hearts.”

Kesilina Chiwoza is a 49 year-old woman from Chanje Village in central Malawi. She and her husband, Tsilizani Jester (57), rely on farming in order to provide for their 6 children. They grow maize, groundnuts and sweet potatoes.

The Chiwoza family house is located on the edge of the village and looks over a beautiful landscape of farm fields descending into the valley.

There is no access to electricity in Chanje village. After the sun sets, it is pitch black. When Kesilina and her family can afford batteries, they use a torch to light the house – but often, like many families in their village, they have to depend on straw fire to see at night. 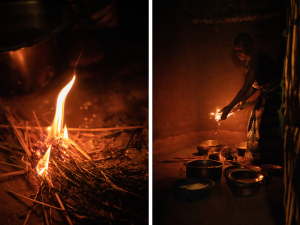 Straw fires are dangerous and many families experience accidents. In June last year, the Chiwoza family’s house caught fire when a child was left unattended and lit a straw fire in the house. “The fire accident happened when we wanted to get maize flour to cook. The fire fell on a sleeping mat and then ignited clothes. The fire grew through the clothes, and then it caught the grass ceiling on fire, because it was a grass thatched house. The whole house burned. We had to construct a new roof. We avoided the accident by rushing out. After that, once we had grown some crops, we sold them for some money. Thereafter we built this house.”

Kesilina’s 17 year old son, Tamandani says,“The accident brought poverty in this house. Also many things became difficult, for example to buy flour. Because of the burning of the house when we see some people using fire, we advised them, ‘Do not use straw-fire, because that’s how we burned our house’. 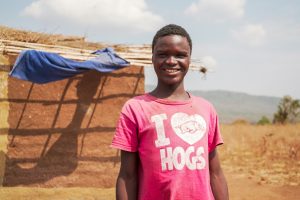 Using straw fire is common in Kesilina’s community where about one in four households are left to rely on open flames such as kerosene lamps, candles, and grass-fire for lighting. The majority of families use poor battery torches, but as batteries are expensive, open flames are often the second option.

“We started using torches. So, whenever we don’t have money, ‘Ohh I might get stranded without batteries!’ That is when we started using straw fire again. The torchlight was insufficient. Because of inadequate money we bought a small torch that uses one battery. So how can it light the whole house? It is not enough. When we use a small torch, the battery lasts one day. A single torch battery lasts for one day.” 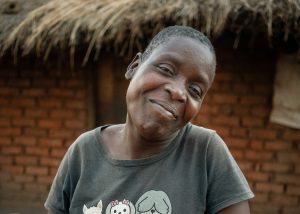 Kesilina Chiwoza in front of the new house they stay in after accidentally catching fire to their old house. Chris Gagnon/SolarAid.

Kesilina says, “We lived in the dark maybe for a month when money was unavailable. Especially in the farming season when money is scarce. We started using straw fire again. It is troublesome. We know it’s a bad solution. We feel that it might bring problems again. It’s all because of poverty, when you don’t have anything, you end up doing something you are not supposed to do.”

“When we use straw fire, we feel very anxious. That’s why we still do that, but there are complaints inside our hearts.”

The sun sets at 6pm in Malawi, year round. When there is no access to light, the surrounding environment can turn dangerous. Road accidents are common, as are animal attacks. 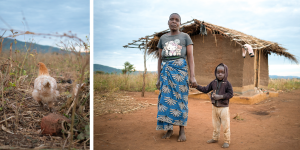 Kesilina with her son in Chanje village, Malawi. Chris Gagnon/SolarAid.

“If a person is sleeping and if someone comes in, like an ambusher and threatens you, you can’t see them. If a snake bites you. You can’t see it, because you just see darkness, not light. But when you have light, you see that something is moving there. If it is a snake you can see it. If it is a rat that has bitten your leg, you can see that it is a rat. But in the dark how can you know anything? Even if a person threatens you, you will just stay quiet, powerless. Therefore it is very painful in my heart,” says Kesilina.

Kesilina’s son Tamandani (17) goes to primary school, standard 8. He likes gospel songs and dreams of becoming a doctor, “I want to finish school, so that I can be a doctor.”

“In the past, some days I only studied during the day because there was no light. In order to study I was using straw fire, candles and a torch to study. One time I could not study because our one candle was finished, and there was no money to buy another candle. I did not pass my exams.” 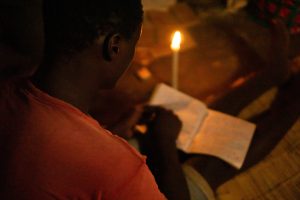 Kesilina knows the dangers of darkness all too well. No one should risk their life trying to light their home. The darkness is deadly.