“My grandfather changed our source of light. He bought for me a paraffin lamp. It was small… he gave me this piece of advice; ‘Be careful, because if you aren’t, this house will burn again.'”

John January, 72, lives with his wife, Judith Patisi, 63, in Chanje Village in central Malawi. John used to be the Village Headman of Chanje, now the couple are farmers and grow groundnuts and maize. John and Judith live without access to electricity. When the sun sets in his village, it becomes pitch black. Many families turn to polluting or dangerous sources of light to escape the dark.

Judith says, “We were in deep poverty, so we were using straw fire. We used straw fire to get ready for bed, then we threw the straw fire outside, then we slept in the dark, without even a lamp. When we found money, after searching, that is when we bought the paraffin lamp to use for light. But most of the time we were sleeping in the dark.”

House fires caused by burning open flames for light are common in rural areas, and John is no stranger the destruction fire causes. He has experienced two fires in his home due to the lack of access to light, both before he met Judith and remarried. “We had lit a kerosene lamp. I grew cotton which was kept in a room. My wife left a baby in that room. As the baby was sleeping, another child came in, and kicked down the paraffin lamp accidentally. Then the lamp fell on the cotton, and the cotton burned.”

“The fire started in the bedroom. We were in the yard. We just saw flames. ‘Eeee! The house is burning!’ That is when we went inside to 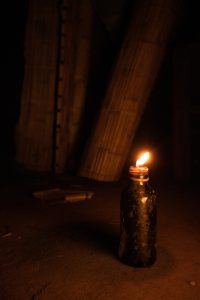 This homemade parafin light is commonly used in the villages. It’s what caused John January’s house and cotton to catch fire. Chris Gagnon/SolarAid.

rescue the baby. I went past the burning cotton in order to save the life of the baby. I seized the baby, as the fire roared. I came out of the door, and some of her clothes had caught fire. I saw wounds on her face. That’s when we realised that she had been injured. At the time, some kind people came and poured water on the cotton.”

“It took 12 months, almost a year to heal the child. Lucky enough, we took her to the hospital and traditional healers. Today you can’t even identify that this is the child. You cannot recognise that she was burned. She is a woman with children now. She has children and the children have children.”

John and his wife lost everything in the fire. He was forced to leave his village and find a temporary job in town to  rebuild their lives.

“My grandfather then changed our source of light. He bought for me a paraffin lamp. It was small. He also bought for me a gallon of paraffin to add in the lamp when I want to use it. ‘But be careful,’ he gave me this piece of advice. ‘Be careful because if you aren’t, this house will burn again.’”

“In another incident, a child also kicked down the lamp. Fortunately the cotton bags were close to the door, so we dragged them outside. Yes indeed. Truly, a grass-thatched house is very difficult. If any spark of fire touches the grass, it ignites.” 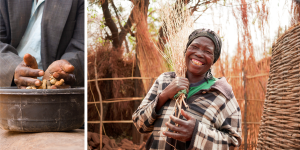 John and Judith are both farmers. Chris Gagnon/SolarAid.

John continues, “When we are happy, we buy rice, juice, we buy sugar, and we buy some fish. People call the fish, “jamisoni”. After that this mom cooks, then we distribute. We call the children and we sit to eat together. Thereafter, I tell the children, ‘go and dance there, where there is music.’ They go to dance and come back to sleep.

When the sun sets in rural Malawi, it becomes too dark to work, study or even socialise with family, John says, “We don’t chat at night. Even in the moonlight, there is not enough light, it’s too dim. When there is darkness, it is the same.” 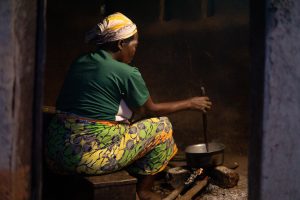 Judith explains that she makes sure to cook before the sun sets as it gets too dark to be in the kitchen. She says it’s important that everyone eats together, “Sometimes we mill maize then we cook porridge in the morning. In the afternoon, we cook nsima and eat. Maybe, when we buy potatoes, all of us eat together. Whoever prepares food doesn’t eat alone. Even myself when I cook anything, I share with others here at home. Even when one cooks meat, we always share. No one eats with her family only. This is how we do here.” 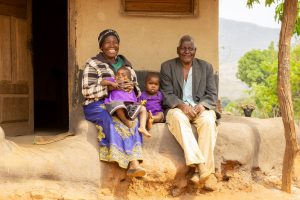 John January and his wife Judith Patisi sitting on their front khondi with their granddaughters. Chris Gagnon/SolarAid.

John January knows the dangers of darkness all too well. No one should risk their life trying to light their home. The darkness is deadly.