22 km from the Zambian town Serenje, a small gravel road leads up to the village of Lena Chipandwe and to bee-keeper, farmers’ collective leader and solar entrepreneur, 60 year-old Penny Mupeta. As the SunnyMoney team is driving up the bumpy road they are greeted by a green garden where Penny is loading a stock of solar lights onto his bicycle. In such a remote corner of this vast country, his new bicycle helps him reach his customers, most of whom live about 16 km away. “I even have customers on the other side of the river in Chief Chibale and Chief Kabamba area, away from this village, especially now that I have a bicycle from SunnyMoney,” says Penny.

“During the rainy season, there are some challenges with delivery, especially when there is no rain coat or something to protect the lights from water. Because of this, I usually wait for the rains to stop before I can make a delivery. Just to protect the stock.” 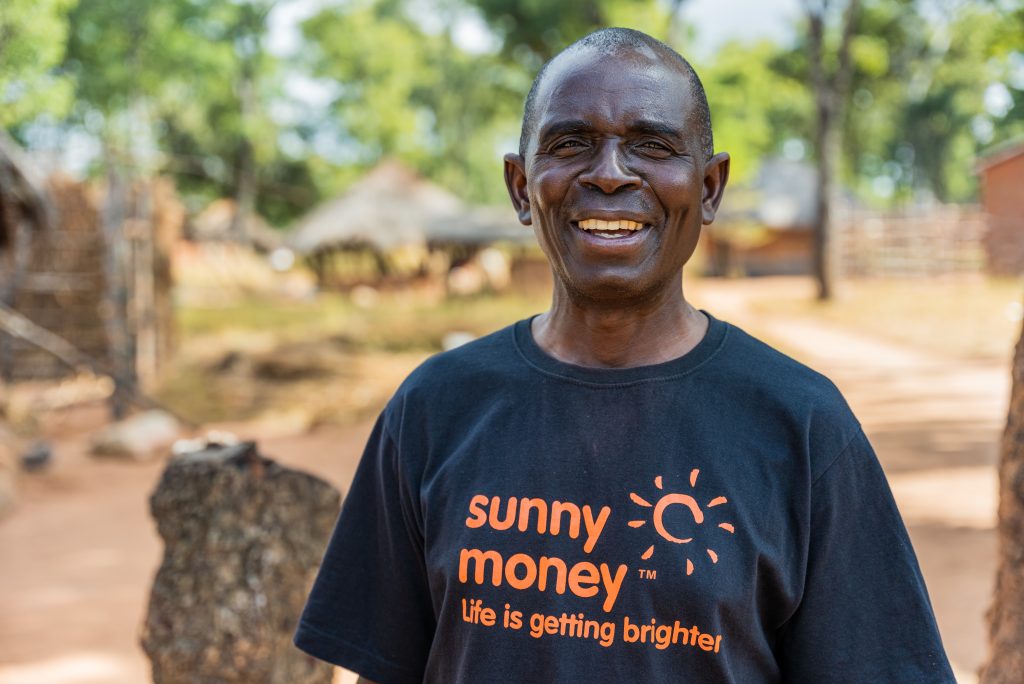 Penny Mupeta outside his home in Serenje, Zambia

But it’s not only the great distances that poses a challenge in this part of Zambia. Penny Mupeta and his 8 children, like most families here, live without access to electricity. “Before having solar lights, we were using paraffin. And if no one passes through to sell, or travel to town to buy paraffin, we would sleep in the dark” 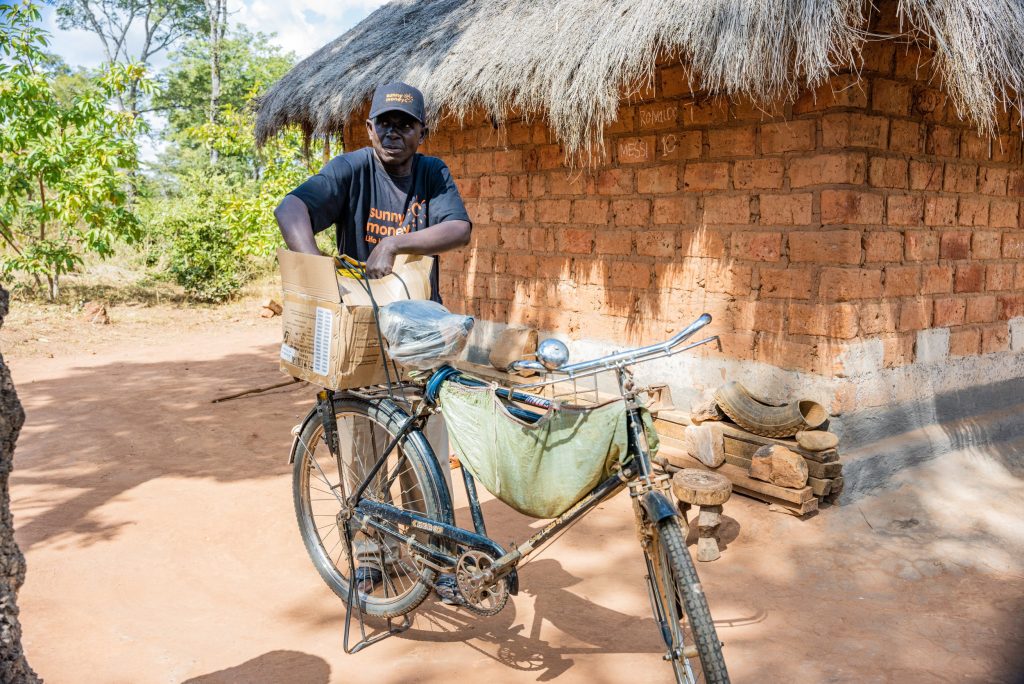 It was in 2018 that Penny stumbled upon the opportunity to become a solar light agent. “The camp chairperson explained to us that there was a company that wanted to educate us on solar lights (…) True to their word, SunnyMoney sent their people who educated us on the lights and how to become an Agent. So, after learning about the lights and seeing how durable the lights were looking, it made me want to become an agent so as to help my area with safe lighting especially.”

The issue of safety is one that is close to Penny’s heart, “My neighbour had a fire accident caused by use of paraffin at the time, three children got burned in the house, and the accident claimed the lives of two children, and I survived. For this reason, I think it is important to continue with this work in order to prevent such accidents.”

“Before I became a [solar] Agent, life was a bit difficult. We would buy paraffin in small quantities for light, and the hospital discouraged its use stating that the fumes were harmful, especially to babies. We would also buy candles which were not long lasting. But from the time I became an Agent and started using these solar lights. The fear of burning the house from the use of candles and paraffin is no longer there. Thanks to these safe lights.”

Being able to study and work safely after the sun has set has changed things in the Mupeta household. Penny’s eldest daughter has just finished school and has said she now wants to become an electrician at the state owned electricity company ZESCO. “Before my children started using solar lights, their performance was bad. But after they had access to solar lights for studying, they started doing well as evidenced in their report books when I collect them. Their performance was so good that when I tried to get a transfer for my daughter Damales to move to another school, her teacher didn’t want her to leave, stating that her performance was so good. It took 2 days to convince her to let her be transferred!” 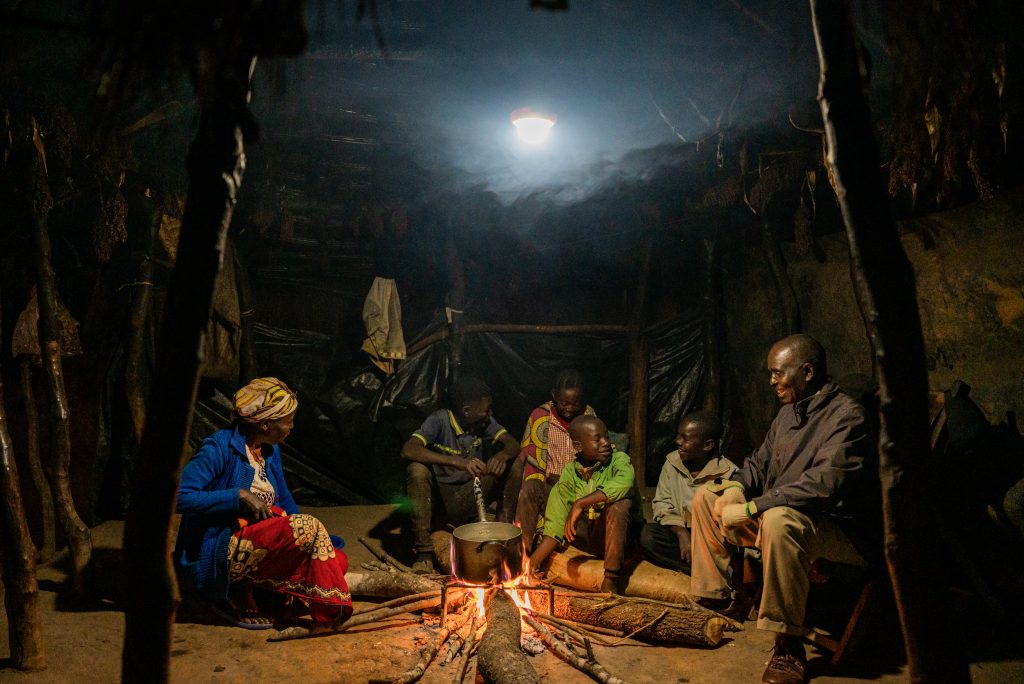 And as a leader in the bee-keeping association COMACO since 2009, Penny can now harvest his honey with the help of the light. “The solar lights help in my farming. As a beekeeper, I usually use the lights when harvesting honey in the evenings. And, I use the lights to check up and feed the livestock in the evenings. Especially if the feeding wasn’t done during the day (…) We harvest honey twice a year, in May and in October or November. This type of farming is also good because nothing goes to waste, and prices for honey never drop as compared to maize.” 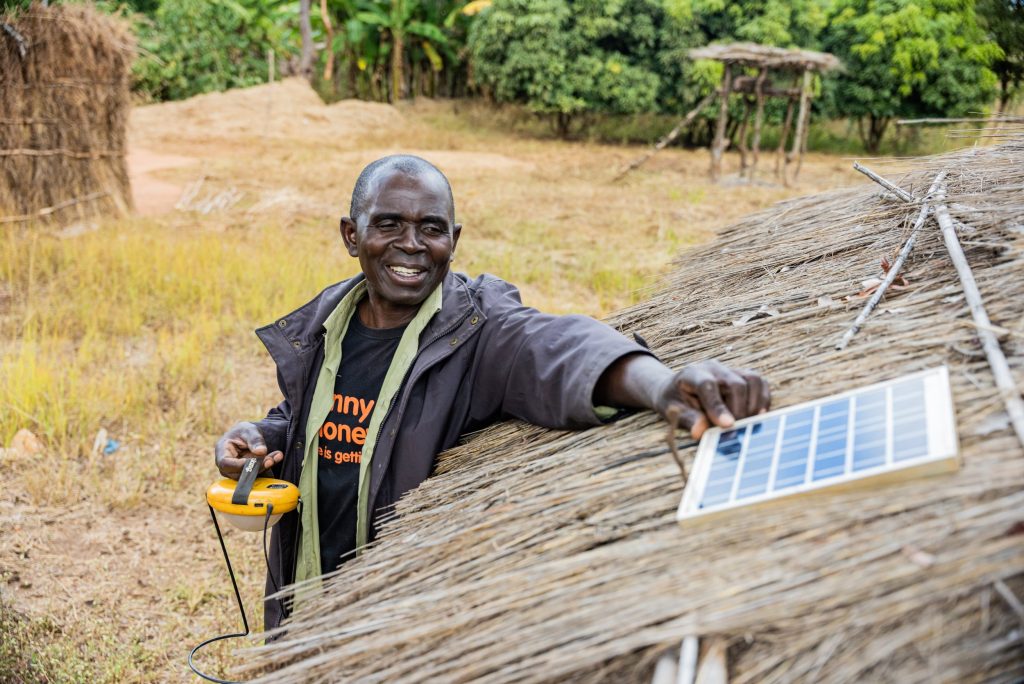 Penny, as a man who is active in his community is driven by a dream of improving the lives of his family and his neighbours, “The good I have seen in being an Agent is an improvement in lighting at my house. Secondly, it is the impact I am making in my area, many people that buy lights from me have also seen an improvement in their lives,” Penny says, and he knows how to spread the word about the benefits of solar. “At Makopa Camp, I am the Camp Chairperson. Because they know me as a SM agent, they always ask me about the lights and I take time to spread word when we have our meetings.” 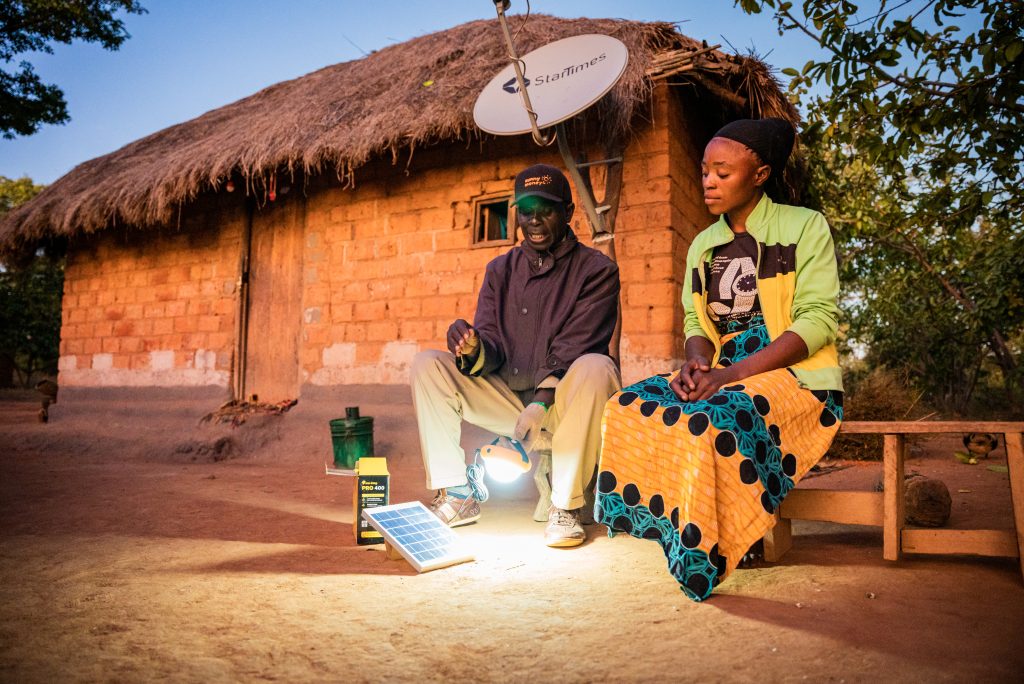 As the entrepreneur he is, he is now planning on building a grocery shop where he would stock and sell solar lights, “As a parent, my hope and prayer is for my children to finish school, so that they have a better future and support others. My biggest goal is to see everyone in my village and other areas have access to solar lights.”