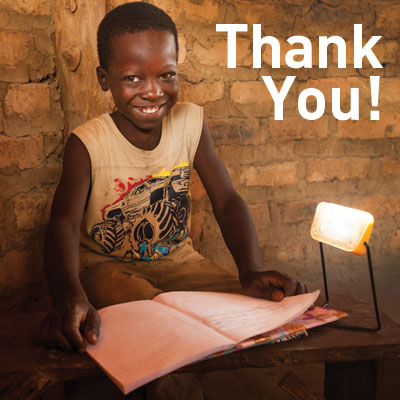 A Zambian boy gets his first experience of solar lighting and realises he’ll be able to read without breathing the toxic fumes from kerosene anymore. A smiles like that says it all.

As 2017 comes to a close we want to send a big THANK YOU to all our supporters and everyone who has helped promote SolarAid and fundraised for us over the year.

It’s been another eventful year and as we pass the winter solstice, with the shortest day of sunshine, it seems important to take stock, reflect on some of this year’s events and to reassert our ambitions for the coming year.

Eradicating the kerosene lamp from Africa is still a massive challenge but, with the emergence of more poor quality solar lights and cheap battery powered LED torches gaining a in foothold the market, our mission is now even more complex.

At SolarAid we still firmly believe that everyone in Africa, especially the less privileged living in remote areas, deserves access to light and that those lights should be solar powered. It’s an obvious solution, which can create jobs, enterprise and help lift a nation out of poverty. And we will not rest until we have achieved that goal.

We have some exciting plans for 2018 and, with your help, we are confident we can make a bigger impact than ever before.

Thank you for all you help so far. With love from the entire team at SolarAid.

In January Africa Live made this great little video, explaining SunnyMoney’s work selling solar lights in Malawi featuring the SM100 in action including some of the children that have benefitted from the worlds most affordable solar light.

We also received an unsolicited letter from Ronald Mkhwichi, the Headteacher at Koche School at the southern end of lake Malawi, with exactly the kind of feedback we strive for.

In February we published an update from the Kenyan Solar For Peace Initiative explaining how solar lights don’t just replace dirty, unhealthy kerosene lamps, but are also being used as tools for promoting peace and development amongst bitterly-divided communities.

In March FINCOOP, Malawi’s largest financial cooperative, signed an agreement with our African social enterprise SunnyMoney, who distribute solar products to people in the rural areas of Malawi, Zambia and Uganda. This project continues to be a major success.

In April we took stock of our working model and revised our costs. SolarAid sells solar lights to people in Africa, on a non-profit basis, and trains them in how to become resellers so they can sell the lights on to end users on a for-profit basis. In this way we not only knock out kerosene use, but provide jobs and income.

In May we were very happy to announce that our little solar light, the SM100, was tested by Lighting Global and was certified as meeting their quality standards.

In June the SM100 solar light was featured on both the BBC website and in the Financial Times, resulting in a massive increase in traffic to our website and a huge boost to our awareness raising. Plus our SunnyMoney Malawi initiative won the Energy Globe National Award!

In July our social enterprise, SunnyMoney, won the Unilever Global Development Award at the 2017 Responsible Business Awards and Our Founder and Chairman, Jeremy Leggett launched his serialised ebook: The Test – Solar light for all: a defining challenge for humanity.

In August we reported on SunnyMoney’s work with Rob Cunliffe from Legado in Mozambique who “protect the world’s most threatened mountain ecosystems by empowering the people who call them home”.

In September we told the story of Bisi, an African agent of change, who stumbled across SolarAid’s work and couldn’t help but get involved as she immediately saw the benefits of solar lamps, and the impact they could make to people in her community in Nigeria. We published a video showing how solar panels are helping children to achieve better exam results and welcomed our new CEO, John Keane.

In October we published stories about babies born by solar light in the health clinics in Rufunsa District of Zambia and two SolarAid supporters delivering change in Africa.

In November we remembered Sunshine is free and how by using sunshine for energy, rural communities are empowering themselves. What’s more, they are happy about it. With solar energy they can build their communities, provide opportunities in schools, health care in clinics and the type of entrepreneurialism in business that just wasn’t possible before.

And in December we published a letter from Alex in Zambia, news about the drought in Malawi and the story of Raphael which reminded us that every child has the right to education.

None of this would have been possible without your support and for that we thank you. Here’s to even greater success in 2018.