When SolarAid was founded in 2006, very few people in rural Africa had heard of solar power and fewer still could afford a solar light. For the past ten years SolarAid has been on a mission, to light up Africa and eradicate the kerosene lantern and although we have made some good progress and helped improve many lives, our work is not over yet.

To help explain our work to date and how the solar landscape has changed, we recently published our 10 year market update report, which looks how the solar markets in Africa have evolved, and the impact SolarAid has made over the last ten years. 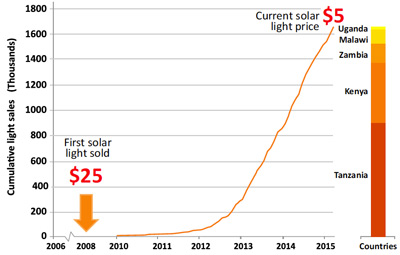 The report focuses in particular on Kenya and Tanzania, where small but thriving solar markets now exist where previously there were none. We like to think we played at least a small part in helping these markets evolve through our social enterprise SunnyMoney, who distribute solar lights in Africa.

Between 2010 and mid 2015 SunnyMoney sold 905,000 solar lights in Tanzania alone, helping the market move into the mainstream, alongside other sellers of solar lights.

The report also highlights some of the amazing solar entrepreneurs and companies that have sprung up in Kenya and Tanzania, who demonstrate the change that has taken place since we first entered these markets. 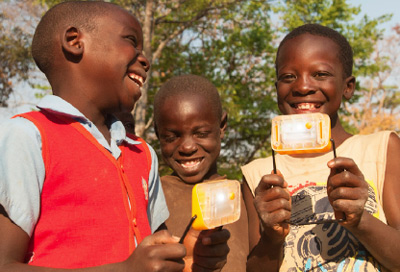 Solar lights are just the starting point, the ‘bottom rung’ of the energy ladder. SolarAid has always believed that, if enough people have access to solar lights, a market for larger systems will evolve and the number of companies now offering solar home systems in Africa, where there were none in 2006, proves this is becoming a reality.

When SolarAid set out on its mission, in 2006, we felt quite alone. There weren’t really any other organisations with similar missions or objectives and SolarAid quickly became a leader in the field of off grid lighting. Over the last ten years, thankfully, the situation has changed and there are now numerous global programmes with specific focuses on lighting up Africa and helping the 60 million people who lack access to electricity. 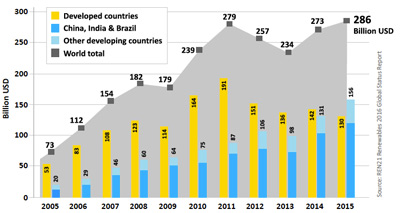 On a global scale the biggest, most observable, change has been the speed with which solar energy has taken off and the increased interest in the African solar market from entrepreneurs, solar companies and investors alike.

The vast majority of investment in the solar sector is profit driven but SolarAid sells lights to maximise social impact, not profit and as such we face a continual challenge. New organisations selling small scale solar obviously focus on the easiest, and most lucrative sectors of the market which often leaves ‘last mile’ users at the ‘base of the pyramid’ in the dark. For this reason SolarAid continues to champion the most marginalised.

SolarAid doesn’t aim to have an ongoing presence in Africa, we simply want to catalyse more solar markets to the point that we are not needed anymore. There are still many countries, and hundreds of millions of people, that need our help before we can say we achieved our vision of “a world where everyone has affordable, clean, renewable power”. 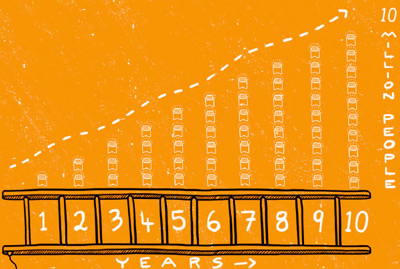 The Africa Progress Power Report predicts that “Between 2015 and 2040, the population of Sub-Saharan Africa is expected to increase by 81% (755 million)”, which is a huge amount and means that “electricity generation will have to almost double by 2040 to maintain per capita provision”.

Hopefully, if we can get more solar lights to ‘last-mile’ users at the ‘base of the pyramid’, we will catalyse more markets and, one day, everyone will have access to clean, renewable power.

The last 10 years have been a roller coaster for SolarAid. Like all charities, we have had our ups and downs, successes and failures and have learned some valuable lessons. None of this, however, would have been even vaguely possible if it was not for the generous donations of our many supporters. Thank you all for making this possible.