Almost 80 million people are currently forcibly displaced from their homes worldwide – and the number is growing. Among refugees living in rural settlements, 90% have very limited access to electricity, which is due largely to the fact that 85% of refugees are hosted in developing countries. These countries are already experiencing major challenges, such as a lack of essential services and widespread energy poverty.

As part of Sustainable Development Goal 7 – access to clean and renewable energy for all – the UN High Commissioner for Refugees (UNHCR) issued the “Clean Energy Challenge” during the Global Refugee Forum 2019, stating, “All refugee settlements and nearby host communities will have access to affordable, reliable, sustainable and modern energy by 2030.” If implemented in the right way, with strong community involvement, solar energy could play a big role in achieving this ambitious goal. 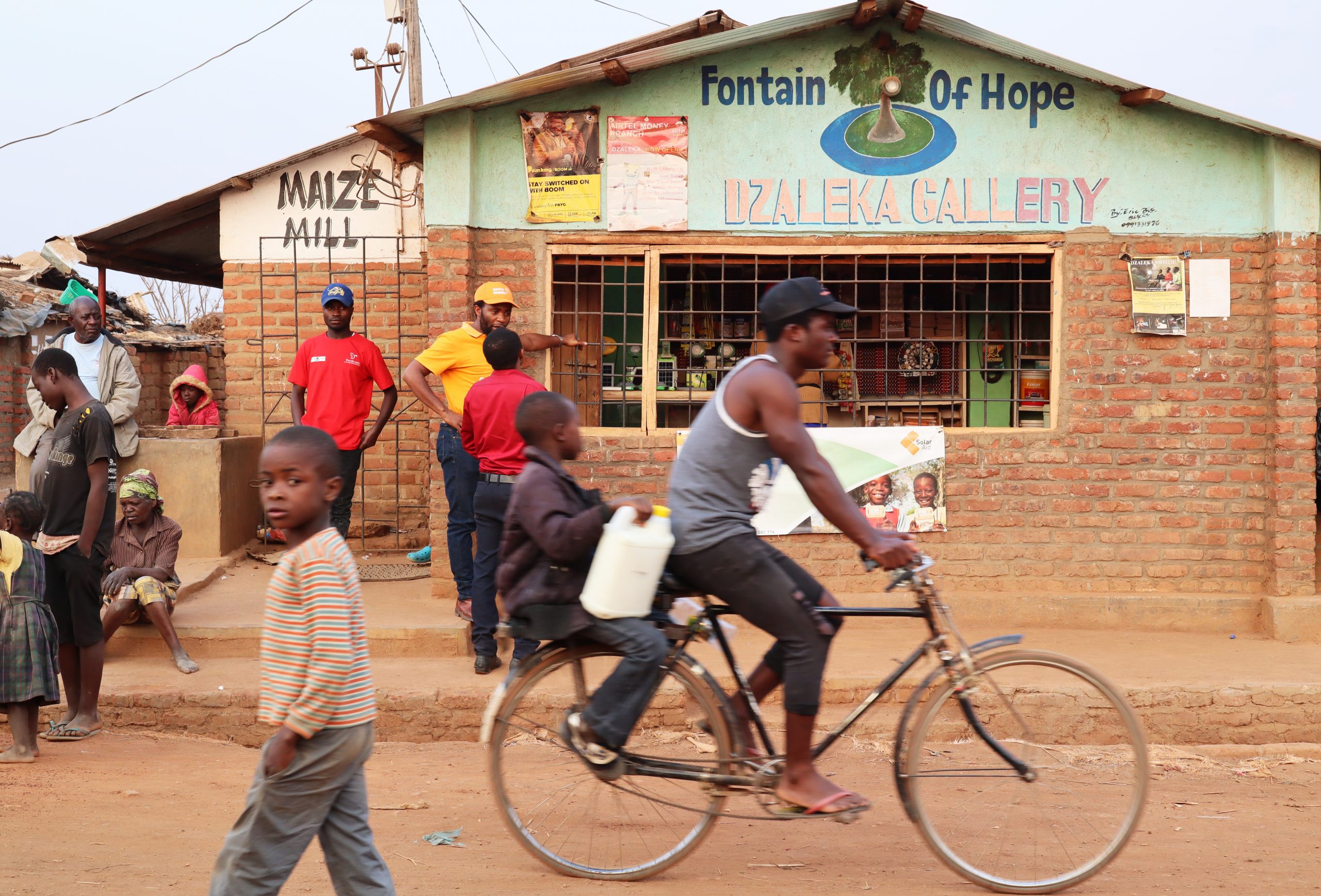 Malawi is one of the countries that are dealing with multiple development challenges while sustaining a substantial refugee population. More than half of the country’s population live on less than one U.S. dollar per day, and 82% lack access to electricity. Dzaleka Refugee Camp lies a few miles outside of the Malawian capital Lilongwe, in Dowa district. The camp is set up as a small town and is bustling with activity. There is a market, a school, small restaurants and shops. The camp was established in 1994 as a result of the surge of people fleeing genocide and violence in Rwanda, Burundi and the Democratic Republic of Congo (DRC), and is now home to over 44,000 refugees from neighbouring countries. The camp was originally built for 10,000 people, but over the past years there has been a large influx of new refugees. This has put additional strain on already scarce resources, and according to UNHCR the camp has reached its absorption capacity.

Just before the sun sets, the activity in the camp intensifies. There is a rush to get home, to cook dinner and to finish the daily chores, because when the sun sets, the camp quickly becomes very dark. With 96% of the people in the camp living below the moderate to ultra-poverty line, the vast majority lack access to electricity. The people who can afford it are often forced to rely on dangerous candles or hazardous kerosene for light in the evening.

As reported by UNHCR, refugee camps and settlements that lack lighting can be unsafe, and people at the settlements face health and protection risks when collecting firewood or using polluting fuels for cooking and lighting. An estimated 20,000 refugees die prematurely each year due to respiratory illnesses.

This is the reason why the community-centred project “The Dzaleka Switch” came about. It is an initiative of the international NGO SolarAid’s social enterprise SunnyMoney, working together with Marcel Cirhuza, a refugee and entrepreneur from the DRC who has been living in the camp for 11 years. The project recognizes that factors such as livelihood for families, quality education for children and safety are all connected to each other – and are all dependent on access to light. However, the answer is not solely to bridge the energy gap, but to also involve local people in Dzaleka as part of the solution – with the end goal of bringing clean and renewable energy to the camp. 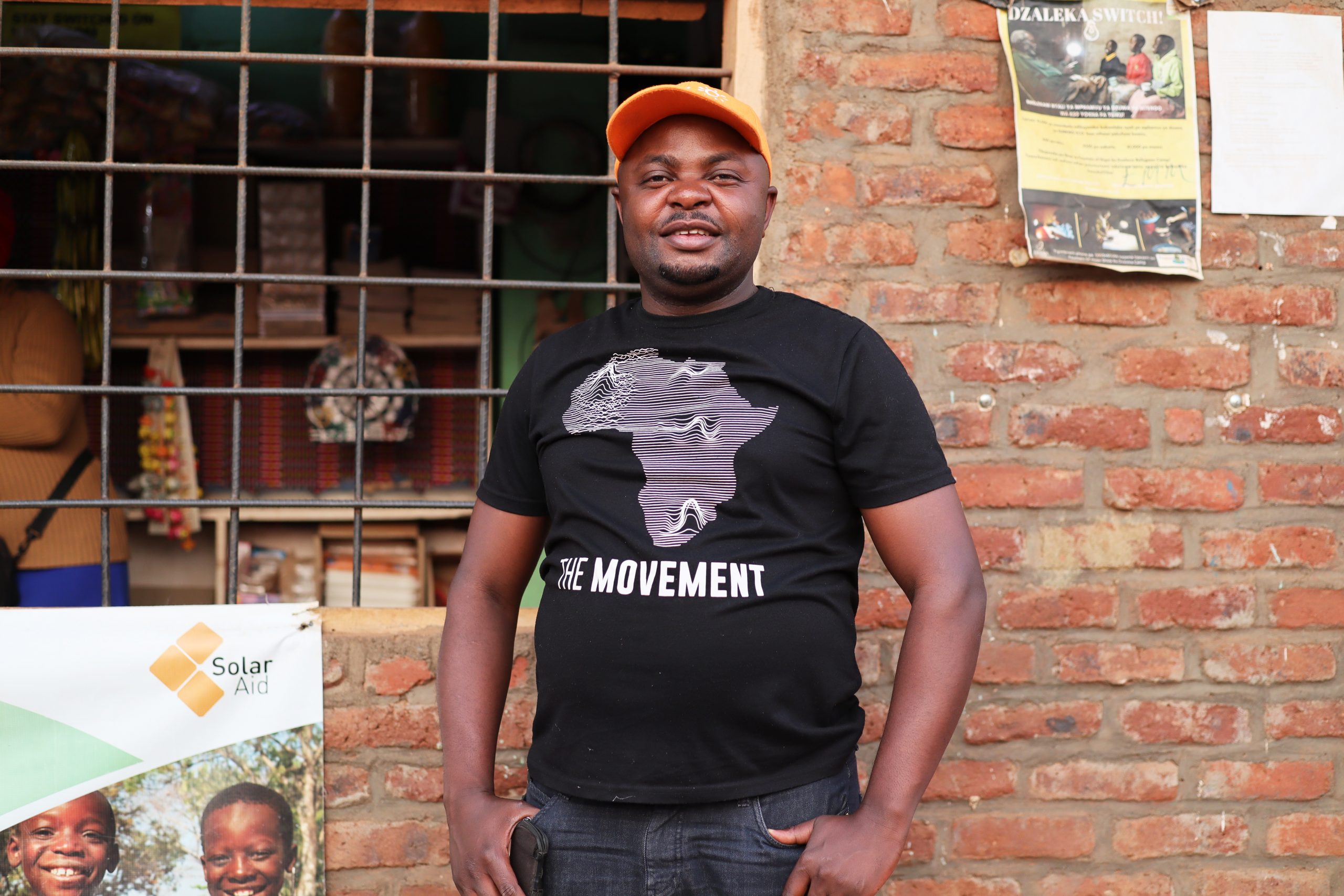 Marcel Cirhuza outside his shop in Dzaleka Refugee Camp.

Through Dzaleka Switch, SolarAid and SunnyMoney provide Cirhuza with solar lighting stock on consignment, which he sells and rents to customers in his shop “Fountain of Hope.” SunnyMoney also works with Fountain of Hope to develop a model that can help provide lighting specifically in refugee camps in an affordable and sustainable manner.

Cirhuza’s shop now serves as an energy hub where people living in Dzaleka can rent solar lights on a weekly, monthly or yearly basis. “At night time, Dzaleka is very dark, because less than 5% of the population has access to electricity,” he says. “We thought, if we brought energy that is affordable, every family can get a light.” By creating a rental hub, his shop allows people living in the camp to rent a solar light for the night, with the long-term aim of being able to own it, by paying in instalments.

Cirhuza says that many accidents happen in the dark because of the large potholes in the road, but gender-based violence is a bigger problem. “With the darkness it is really risky for children and girls, but with the affordable energy and lamps we have come up with a solution where most of the families have access to light that they can use in their houses, but they can also move with the lamp.”

The solar lights that Cirhuza is renting out are not only contributing to an increased sense of security for the people living in the camp – they also boost local business and contribute to the local economy.

As the camp has grown well beyond capacity, the World Food Programme was forced to reduce food rations by half in 2019. Now, sustainable livelihood has become a main focus of humanitarian actors in the camp. There is even a Livelihood Graduation Approach program which aims to lift the camp’s extremely poor households out of poverty. There has been an increase in entrepreneurship in Dzaleka, which has created successful micro-businesses. However, multiple constraints on sustainable livelihood remain, including limited access to land, restricted movement at the camp, and access to energy. As Brave Mhonie, General Manager at SolarAid Malawi puts it, “When the day is cut short at 6:00 pm due to lack of light, it limits the capabilities of work and livelihood. The lack of lighting forces most businesses to shut when the sun has set.”

Solar lighting is starting to address this challenge. Alexi, a refugee from Rwanda, has a small food stand set up just across the street from Marcel Cirhuza’s shop, “Before, when evening came, I used to close my business,” she says – so she started renting a solar light three months ago from Cirhuza’s store. “I took the lamp credit from the shop, and since then I’m paying back slowly, slowly. And it’s boosting my business. Now, I light it in the evening and the customers can see my business.”

Alexi is proud to show the light, and explains how she is able to move around with it. She uses it at her home as well. “Even when I enter my house, I can light it and I can see anything that I want to see. It’s mobile, I can walk with the lamp. I can take it with me to my bedroom. It’s very easy. It’s also very nice because you can put it on a table, you can hold it however you want. If you want to go to the toilet, you can bring it with you without any problems. The light is very helpful.” 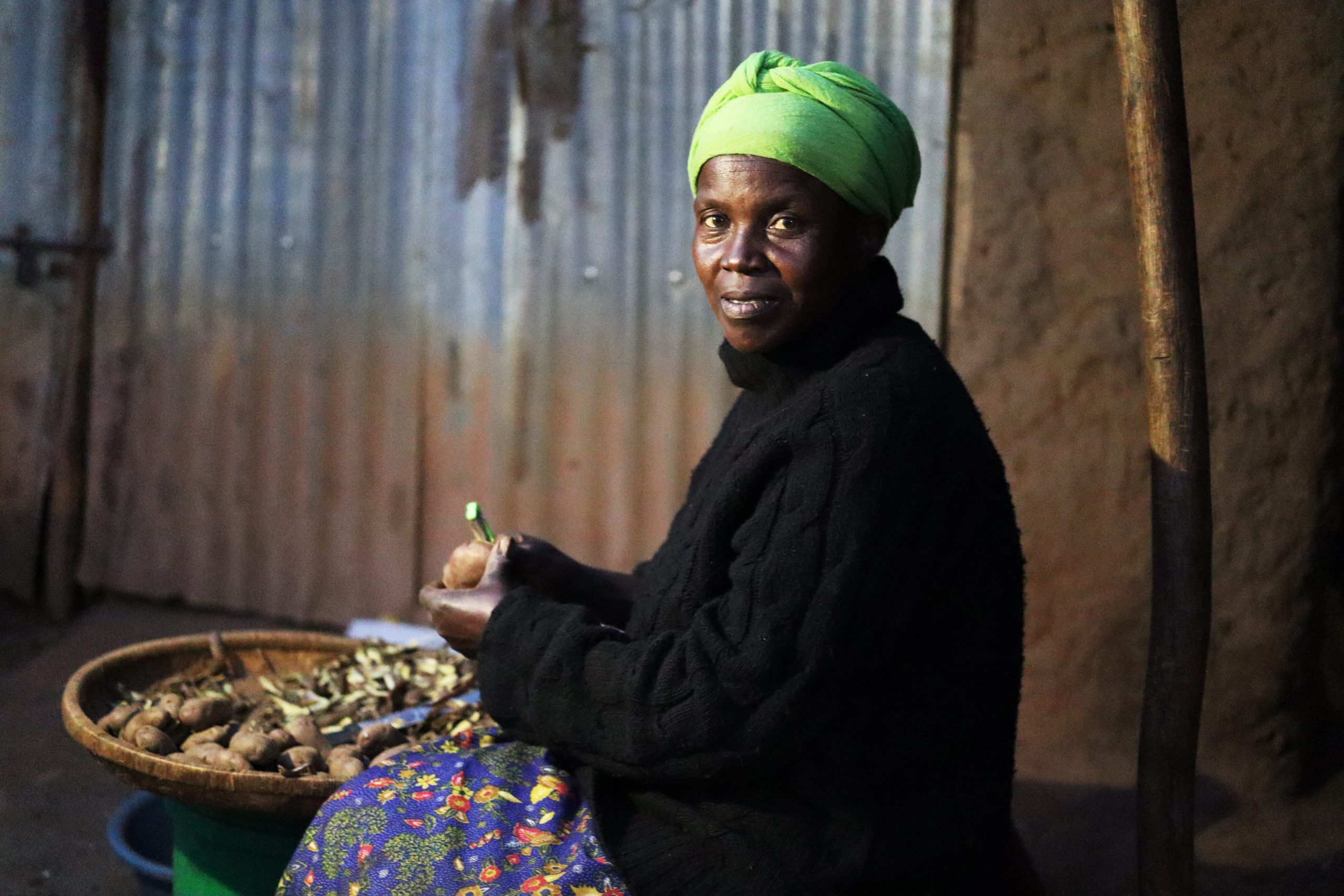 Alexi uses a solar light to be able to work in the evenings.

THE IMPACT OF SOLAR SOLUTIONS FOR REFUGEES

One of the reasons why many renewable energy interventions have failed in humanitarian work is the lack of specialist knowledge to maintain and run large solar installations in a temporary setting. However, small, mobile solar lights, chargers and home systems, which require no specialist knowledge to operate, are available at lower costs – and can even be purchased through pay-as-you-go financing. They are leading to rapid change, enabling people living in refugee camps to access and own solar solutions for the first time.

While Dzaleka was set up as a temporary camp, many children have been born here. A new generation has now spent the majority of their lives in the camp, such that it has evolved from being a temporary humanitarian settlement into a long-term home for many people. Solar lighting can make the camp more liveable for the people who will call it home – potentially for many years to come. 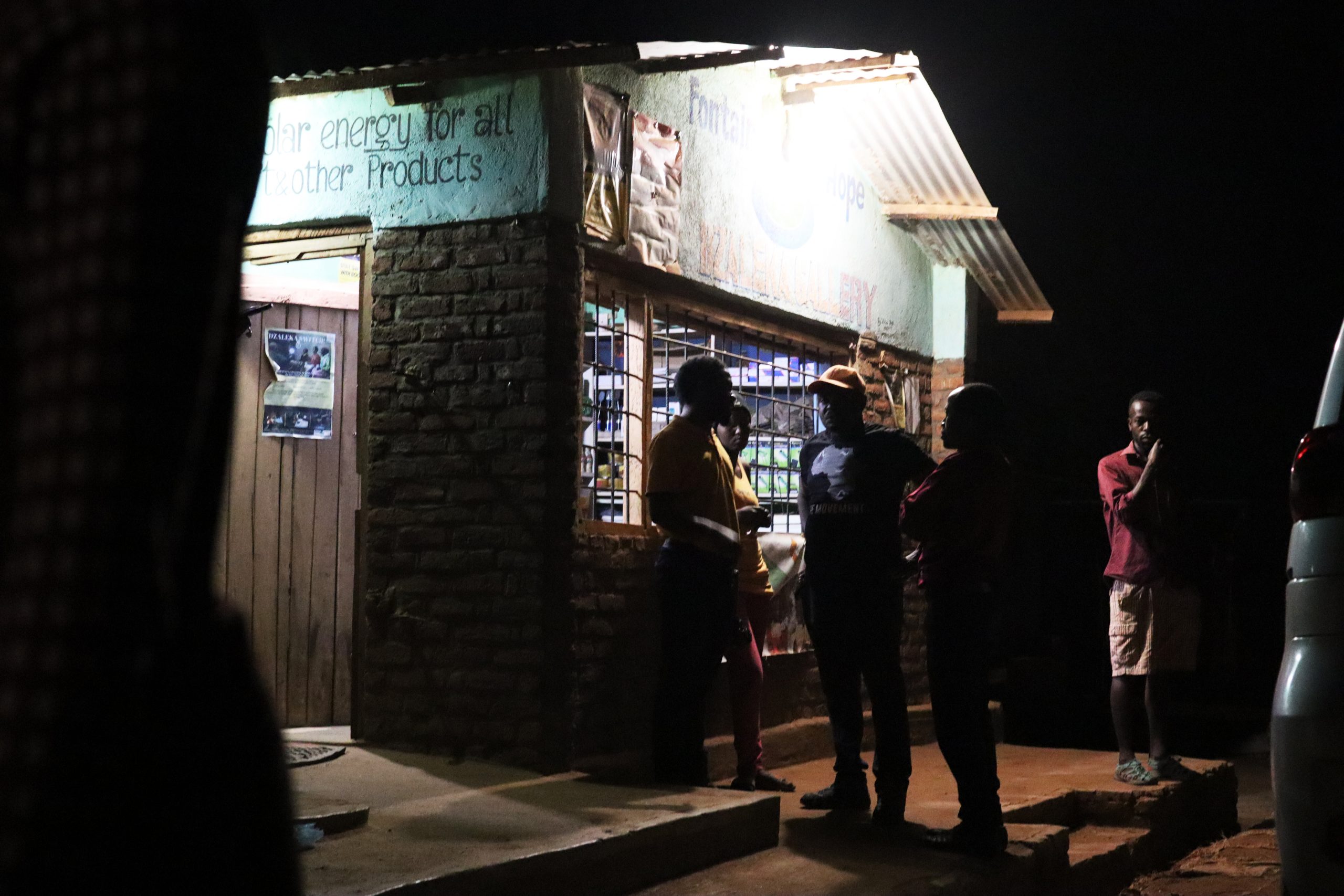 Darkness has fallen over Dzaleka refugee Camp and people gather outside of Marcel’s shop.

As darkness rapidly falls over the camp, people are gathering to chat outside of Cirhuza’s shop – one of few places that are lit up on the road. Candles are flickering in some of the other houses, and this is another reason why he has been passionate about getting solar light to the camp. “(Solar lights are) preventing some accidents like houses burning, because here most of the houses are grass houses and they are closed. So in the past years, there were a lot of houses that were getting burned. So to come up with solutions to the problems, we thought of bringing cheap and affordable, and also clean energy to the community at a very cheap price, so that everyone can afford it.”

Accidents due to candles being knocked over have often been caused by children trying to study in the evening. Yet pursuing a quality education without being able to read after the sun has set is impossible.

Kaberouka tells us he used to use battery powered torches to get light before, but they constantly ran out of battery and it became very expensive. ”A solar light you can just charge, but batteries you have to buy all the time.” In a small brick house, Jean Paul Kaberouka from Rwanda lives with his family. He bought the first solar light out of Cirhuza’s shop one and a half years ago, and he now owns two lights. In the evening, he puts one of the lights in a room for school children to be able to come and study. He uses the other one for his own business, selling local alcohol. 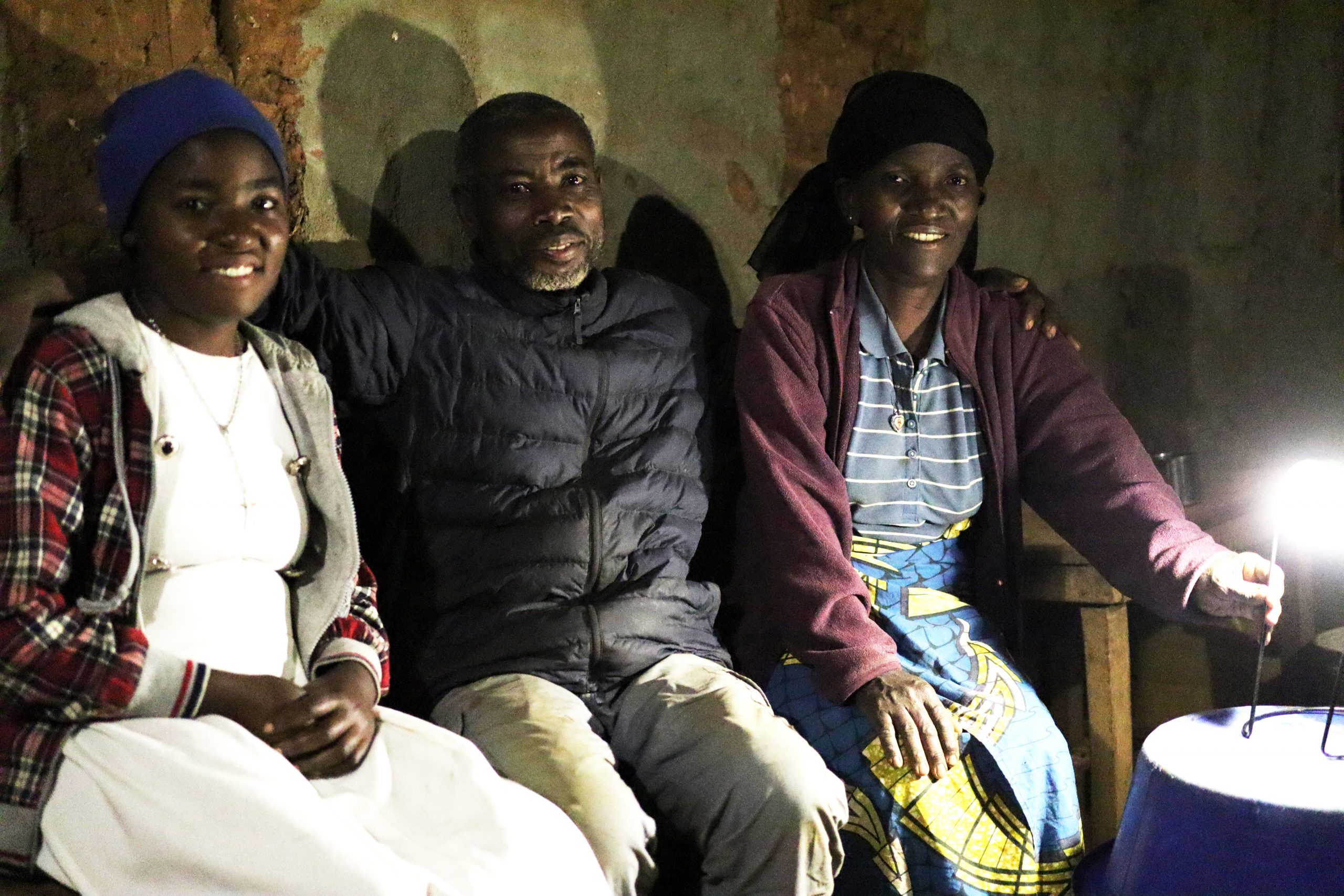 Jean Paul Kaberouka with family. Jean Paul was the first one to buy a solar light at Marcel’s shop.

With the high influx of people to the camp, he explains how people there are struggling – and how this impacts their usage of solar lighting. ”If they have money, they want to buy food first. So if there is no food, they can’t buy lamps. Many people love these lamps, but the problem now is food.” This is one of the reasons why being able to rent a solar light and pay in instalments has helped people in the camp.

At Dzaleka, the lack of energy affects every aspect of living at the camp. But for now, access to light is dependent on the presence of social enterprises and entrepreneurs such as Marcel Cirhuza. With the support of SolarAid, entrepreneurs like him are now working directly with their communities, helping them access solar lighting and power for the first time. A similar approach at refugee settlements and camps across the continent could change the lives of people who have been forced to flee their homes – and who are now living in the dark.