John Keane, CEO of SolarAid, reports back from his recent trip to visit Mandevu village, where we hope to run the pilot of Project Switch, in Malawi. His night walk reveals an incredible story of darkness, poverty and inspiring ingenuity which demonstrates the desperate need for light…

Last week, I visited Mandevu village in Kasungu in central Malawi and was taken on a night walk to
get a sense of what the village was like after dark.

As we arrived in the late afternoon, we were greeted by the chief and his deputy, who oversee affairs within the community and they started to show us around the village. 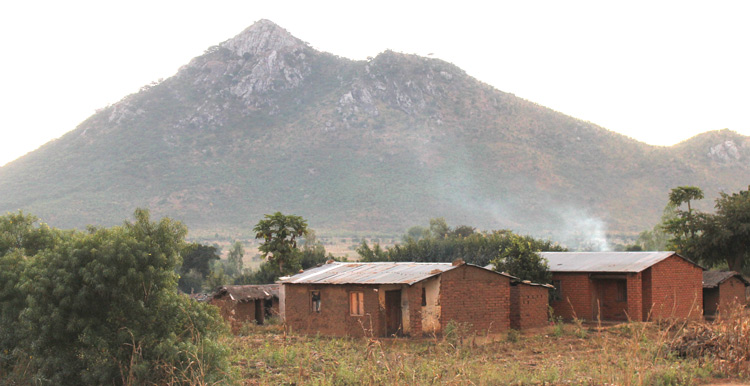 The village sits at the foot of distinctive green hills, providing an unmistakable backdrop.

It’s not long before the sun starts to set, which it does quickly in this part of the world, and up rise
the stars and moon. The world all around us has become very, very, dark.

First stop is the local shop, which is essentially a small kiosk run by Howard Mwale. Howard sells a
range of goods, ranging from toothpaste and bars of soap, to matches and small clear plastic bags
each containing 100ml of cooking oil. It’s dark, however, so it’s difficult to see everything on offer.

Howard lights his shop by jamming a small battery powered torch between into the ceiling. I bought
a version of the same torch the next day, for 800 Kwacha (£ 0.80). It doesn’t give off much light, and
he has to buy three new AA batteries each day to keep it running, costing him 150Kwacha (£0.15).
Needless to say, these are not high quality batteries. The light does, however, let passers by know
that he is open for business. He usually stays open until 9pm. 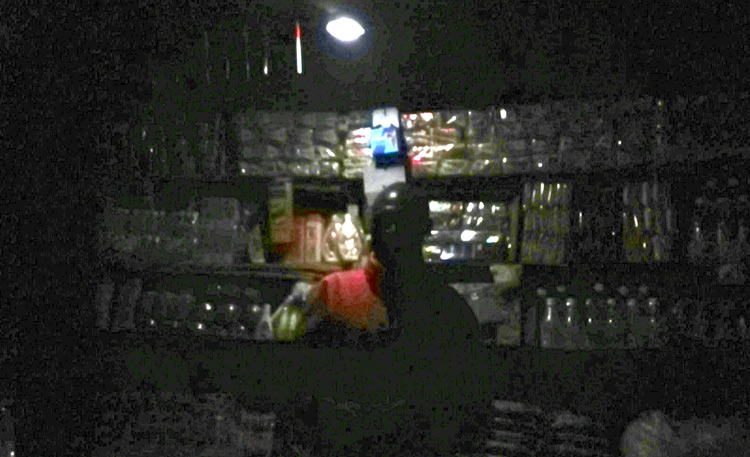 Howard’s shop lit by a torch – NB: This photo has been significantly brightened in Photoshop, you couldn’t even see Howard before it was adjusted!

As we continued our walk, we saw the outline of a house with its door open. Inside was a faint light
coming from the floor. I asked the chief what was generating the faint light – it was almost like a
firefly. We were then invited into the house by Gladys, who lives there with her children. On the
mud floor of Gladys’ small home was an interesting sight: a ‘stick’, with a shoe lace wrapped and
tied around it and an LED light fixed to the end of it with the help of a thin rubber strip. On closer
inspection, you could see a thin wire running along the side and the ‘stick torch’ was in fact thin
strips of smooth bark, inside of which were four red AA batteries. 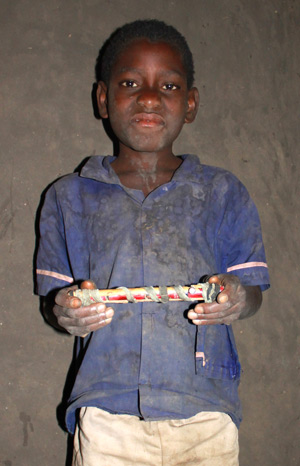 George holding his home made torch. He’s 9 years old. That means he wasn’t born when SolarAid was established in 2006. Yet he’s part of yet another generation growing up without access to electric light and power.

Gladys explained that her nine year old son George has made the ‘stick torch’ himself, which is
genuinely impressive. The light from the torch gave off less light than a candle, however, which is
undoubtedly due to the fact that only one of the batteries had been bought. The remaining three
batteries were picked up off the ground and simply being used to make up the voltage needed to
light the LED.

This small torch marries together LEDs – the future of efficient lighting, ingenuity and resourcefulness and true poverty. This torch, made by a small boy who is part of a new generation growing up without light and power, should be in a museum, not actually being used to light a home.

If ever there was a light which defines darkness it’s this one.

It’s 2018 and each night, families are sitting around a homemade ‘stick torch’ which gives off less light than a candle. They’ll be doing this again tonight.

Brave Mhonie, who leads our operation in Malawi, then turned to me and whispered, “Let’s change this”.

With your help we can change this! Please support our Project Switch appeal to light up Mandevu Village, so that George, and all the other children and their families, can have a brighter future.