As our out-going CEO, Andrew Webb prepares to join the Executive Board at VSO International as their new Director of Business Development. He has a special farewell message for our supporters. Over to you Andy.

As I come to the end of my time at SolarAid and wrap-up a few loose ends I have found myself reflecting on the last 2 years and all we have achieved alongside the opportunities and challenges that have emerged as the off-grid energy market takes off.

Four weeks ago I was at an event that I think signaled the end of the kerosene lamp in Africa – a result we would have only dreamed of just five years ago. This event, hosted at the Facebook HQ in London, launched the UK governments Energy Africa initiative and included compelling testimony and support from Kofi Annan, Richard Branson and Bob Geldof, amongst many others. There can be no doubting that SolarAid has played a major role in arriving at this highly significant moment and will remain hugely relevant in the years to come.

Five years ago SolarAid made a break-through that would see us become one of the trail-blazers in bringing cheap, clean energy to ordinary families across rural Africa. Our goal, deliberately huge and audacious, was to bring an end to the kerosene lamp in Africa. We set out to prove that we could replace this expensive, dangerous and dirty source of wholly inadequate light used in over 100 million homes in rural Africa with a cheaper, safer and brighter source of light from a small, very simple portable solar light. And in the process transforming lives of each and every family that made the investment. 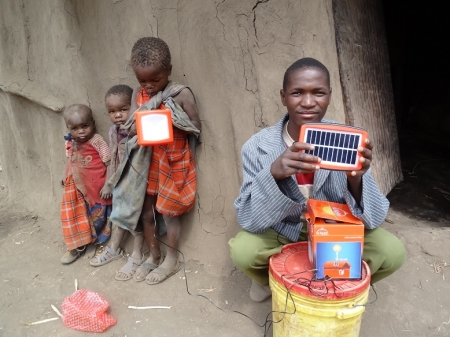 A Masai family with their solar light in Tanzania

Since then we have sold over 1.7 million portable solar light, reaching over 10 million people, with operations in just five countries in Africa. Better still – we found that 90 per cent of our customers lived below the poverty line on a subsistence income of less than $1.25 a day, proving the viability of our last-mile distribution model and becoming the fastest growing and largest seller of solar lights on the continent. In parallel, we built policy and research functions designed to influence and support the whole last mile renewable energy sector as it developed.

Moreover, and perhaps more importantly, we are widely credited with catalysing country-wide markets in Tanzania and Kenya, paving the way for dozens of new entrants to launch solar-related energy initiatives and in the process, increasing our impact many times over.

The ‘off-grid’ energy sector is well and truly on the march. As well it should be. Grid power will simply not reach many millions of people in Africa – and for those it can reach, it will only do so in the next 30 to 50 years with the yet to be seen massive investment it requires. To stand-by and wait for this to happen would be to miss whole generations – men, women and children whose lives could be transformed by access to energy today.

It is on this final point that SolarAid has so much still to offer. With all the investment and dynamism coming to the off-grid energy sector there is great risk in forgetting that it is the first watt of power brought to a family living well below the poverty line that is the most transformative – and this includes the great majority of the 600 million people currently living in Africa without access to electricity. There is understandable excitement of the evident possibilities of pay-as-you-go small home systems and mini-grid technology development and many other future developments besides – but it is crucial that pico-solar remains part of the mix – that is to say small portable solar lights which not only offer a better, cheaper light source but very often now also charge mobile phones – the importance of which is huge. We also know from our research that buying an entry-level light starts a family on the ‘energy ladder’. They can take the very first affordable step, begin to save money, build trust in the technology, use their savings for other important household expenditure – like food, seeds for planting, school books – and then consider the next step on the energy ladder; buying larger lights or small home systems and ultimately buying higher levels of energy provision to power TVs and fridges.

In exactly this way, we know we have helped change the lives of over 1.5 million families already. And on a more macro level this has also meant that whole markets have been created. We very deliberately set out to create a slip-stream in which other solar companies and NGOs could and have followed.

However, I also find myself ruing the practical repercussions of being a trail-blazer. What happens when you are the victim of your own success but the job is far from done?

Along with catalysation of the markets in Tanzania and Kenya came increased competition – and most damaging of all a flood of cheap low quality rip-off products many of which last barely a few weeks. As a result sales in our two biggest markets fell off dramatically causing us all kinds of problems. Due to this, we are going through some very painful re-structuring and having to make some very hard decisions in response to a fast-moving market and severe cash restrictions. This has meant finding new organizational homes for our policy and research work – which I am pleased to say we have managed to achieve. We have also had to reduce costs more generally and will be moving to a smaller and cheaper office in the next few weeks.

All of that said, at SolarAid we know that in such a fast-moving environment, we must stand prepared to rip up your business plan and start again. We did that once before – five years ago – which then saw SolarAid become incredibly successful. With that in mind, we are in the middle of taking a very hard look once again.

And we also know that every organisation must constantly check alignment of its goals, the models and approaches they use and the money and resources they can mobilise. We have seen that what has served us so well for a number of years is no longer quite as effective. As a result, much of our re-thinking is ensuring we get this right in the face of new realities and continue to serve our customers in the best possible way.

As I prepare to leave SolarAid to start my next big adventure I know there are some very exciting years ahead. SolarAid remains utterly relevant to what is needed – reaching into that ‘last-mile’ and opening markets for the good of all. Much of the recent activity in Africa has been concentrated in five to six countries – there are another 45 to 50 countries in sub-Saharan Africa which must now also see the benefits of everything that we and many others have learned and are capable of doing. And for this to happen it is crucial that SolarAid finds new sources of funding support. Andy with the SolarAid team in February 2014

It only remains for me to thank each and every one of our supporters. Your support has come in so many different ways, always with passion. You are part of a great success story. Now there are new chapters of the story to write.

For all the recognition SolarAid has received along the way, by far the biggest personal reward I have experienced has been working with a committed and passionate team at SolarAid and SunnyMoney and knowing, absolutely knowing, that each and every single light we have sold has brought enormous benefit to each one of the families who made the decision to invest with their own money. In many ways they are leading the way – and we must follow.