“When you light straw fire, it burns out after a short time. The fire went on, reached the roof and it burned the house.”

Goodwell Kangolwa is a 42 year-old smallholder farmer in Malambiro village in central Malawi. He lives with his wife Patrisha Jenufala, 36, and their four children.  Goodwell and Patricia lack access to electricity and struggle as the sun sets.

“A lot of things happen because of the light shortage at home. At night, it is dark. There are things that move around. Things like snakes, and other things which move at night. You can’t see them, and a person may end up being bitten. It is very worrisome if there is no light. But also, for a person to find their things, it becomes difficult, as there is nothing that gives you light. How can you see in the dark? In addition, the children that I mentioned earlier, cannot study. How can they see? So it affects us in so many ways. We are in need of light here in our area. It is very worrisome if there is no light.”

To escape the darkness, Goodwell and Patrisha have a few battery torches, but they give off poor lighting and the batteries are expensive.

“In the past, we were using homemade kerosene lamps. However, if paraffin was not available for us to have light, we would use straw fire. We could light straw fire and put it in the corner, which often caused accidents. When the flames are tall, the flames can reach the roof and burn the house.” 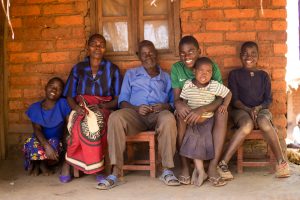 “Currently we have three torches. Most of the time we can’t use them because they require batteries. The batteries last for a short period, so sometimes we find ourselves in the dark because we are in need of money.”

In 2014, the family experienced a house fire due to the use of straw fire. “The boy, Petulo (17), used straw fire as light in the house. At that time, he was struggling in school because he couldn’t study at home. I didn’t have paraffin, or a torch that he could use to study. He lit the straw fire to be able to see a bit before sleeping. He only wanted light for a short time, so he was using the light just to see how the sleeping area was, to see if there was anything that could hurt him. He laid the mat and slept while the straw fire was burning. When you light straw fire, it burns out after a short time. The fire went on, reached the roof and it burned the house.”

“The house burned largely on the side where the boy was sleeping. But we managed to extinguish the rest of the house-fire; neighbours rushed to help and they managed to extinguish the fire. The whole house did not burn down. The place where he was sleeping was the room where we kept maize. But people rescued some of it. Because of the burning of the house, we encountered several problems. The clothes for the boy burned. The books he was using also burned.” 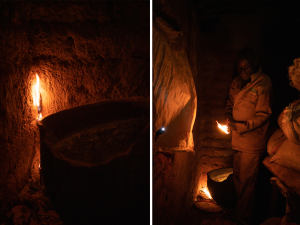 When Goodwell doesn’t have money, he burns straw fire for light. Chris Gagnon/SolarAid.

Patrisha says, “On the day, everyone was crying because we lost food as well as clothes for the child. The morning after the accident we went to the market to buy a torch. That is what we were using, although the batteries didn’t last long. But we just accepted that. What we can we do then?”

“After the fire accident, to restore things, we sold our livestock like pigs in order to buy the food that was damaged as well as school items for the child. But, we could do this because we had livestock. It helped us to cover some of the things that were lost. However, if there was no accident, the livestock could have helped us in different way as a household,” says Goodwell.

“Currently I am still using the same torches so that an accident like that doesn’t happen again. We should protect our property.” 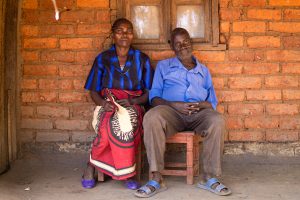 Goodwell and Patricia are very engaged in their children’s education, and reflect a lot over their future. But, they worry about the lack of light which they can see affects their studies in the evening.

“One of the torches we gave to Petulo so that he may use it to study as a student. Sometimes it happens that the child stays at home. He doesn’t go to study because he doesn’t have something for lighting. So, this is what worries us very much because for a child to have a good childhood, he has to learn. But for the child to learn, he must study,” says Goodwell. 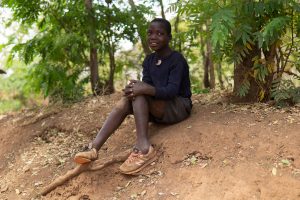 Patricia says, “The children perform well in some subjects, such as mathematics and physical geography. Bless’s (8) personality is very unique. He performs drama and other interesting things. We expect that he will be a teacher or a pastor because he is also good at church doctrines. He is gifted in spiritual matters such that he talks about becoming a pastor. We just call him pastor here at home.”

“Caroline is going to write form 4 exams very soon. Her interest is in the military. She wants to become a soldier. You can see it in the way she acts, and the subjects she takes at school. She performs really well in Chichewa and English.” 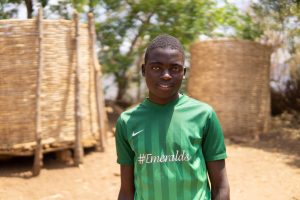 “By educating a child, what we want is for his life to improve, so that they can afford the needs of their everyday life. As a community, we would love that when our children are educated they should contribute to the development of our area. The community will develop if children are working and finding jobs. Our everyday life is going to change. It will never be as it was. These children won’t sleep in huts like ours. These children will build nice houses and they will be living in those good houses. In this way, our area will develop unlike when the child hasn’t attended school.”

“When we are happy as a family, most of the time it is after receiving dinner. We sit down and discuss how the children’s education is progressing. But, also most of the time, we talk about Sunday school because some of the children are in Sunday school. So, we ask what they learned at Sunday school. We share wisdom on what each person does in terms of spiritual life, culture and education. On a special day, as a family our special day can be a birthday so we eat things like rice and meat.” Goodwell is no stranger to the dangers of darkness. No one should risk their life trying to light their home. The darkness is deadly.