A year ago when we first met John January, he recounted his harrowing tale of losing everything to a house fire that started when his kerosene lamp fell on his cotton harvest. He was forced to leave his village and family in order to earn money to begin rebuilding their lives. While the fire happened many years ago, the problem of choosing between dirty, dangerous sources of light or total darkness persisted.

One year later, this is now a choice of the past.

Situated in the centre of a cluster of homes in Chanje Village, rural Malawi, John January’s home has always been the meeting place. His sons’ and daughters’ homes surround his house, so the grandchildren and their friends are never more than a stone’s throw away laughing, dancing and playing while the neighbours gather to catch up on the latest gossip or to share a meal.

Before, when the sun set, the village went quiet. But at the flick of a switch, John January and his neighbours are now able to extend their evenings by solar light.

“We sit and we chat very well. The children sit on this side, we sit on the other side and people from other houses that side, and we chat here. We see all around here, with the light. We tell them [children] folktales. And we tell them, don’t fight or to chase one another, but sit down and play. When the sound system is out and they play a record, [we tell them] start dancing. It’s great.” 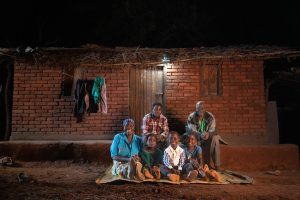 John January and his family outside his son’s home. SolarAid/Chris Gagnon.

With access to clean, safe affordable light, John no longer has to make the choice between dirty, dangerous fuels or total darkness in the evening. He knows his family is safe, no longer worrying about his home going up in flames.

“We threw away straw fire [burning straw for light]. We threw it away, for real. Now we don’t know where the straw is. We just ask, ‘can you switch the lights there, and light reaches everywhere even in the house, it becomes bright at once, indeed.”

Not only does the solar light bring safety, but also increased savings. 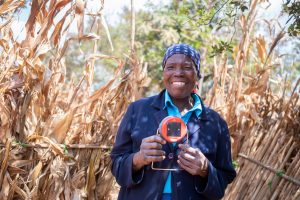 The scene is completely different than a year ago when John sat in his home telling us about the accidents he has suffered due to the lack of light in his house. He knew that kerosene was dangerous but he had few other options.

“My grandfather then changed our source of light. He bought for me a paraffin lamp. It was small. He also bought for me a gallon of paraffin to add in the lamp when I want to use it. ‘But be careful,’ he gave me this piece of advice. ‘Be careful because if you aren’t, this house will burn again.’”

Overnight everything changed for John.

“On that day [the solar light was installed] we danced. Starting from us elders, children, this one [child] and that one [child]. They jumped with joy that light is present here now.” 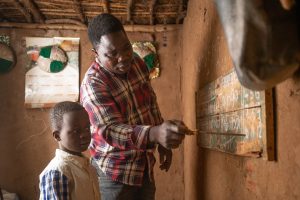 Bandicto Edward and his son Aubrey do lessons in their home with their solar light. SolarAid/Chris Gagnon.

The best part is that this is not just John’s story anymore.

John’s son Benedicto lives next door with his son. With access to light in the evening, Benedicto’s son is able to study after dark.

“This light will help my child to become a pilot or whatever work position in the government which requires school, because in this house we received solar light which doesn’t finish or die out anyhow, it lights all over. Ah! There is every chance that this child will go wherever with school, it is possible.”

From more savings to healthier families and realised dreams, solar light creates a ripple effect in communities like John’s.

You can light up more communities like John’s with the flick of a switch. Give the gift of light today and watch it double with our match fund.