SolarAid is fortunate in being able to monitor its impacts and costs better than most charities. Impacts can be measured in detail because the product of our work is very tangible both at the level of the individual and of the nation. We sell solar lights to people in Africa, on a non-profit basis, and train them in how to become resellers so they can sell the lights on to end users on a for-profit basis. In that way we not only knock out kerosene use, but provide jobs and income. Just a little research in the field can go a long way in measuring our impacts, and we have done a lot. This research, made up of 30,000 research interactions, formed the basis of the Global Off-Grid Lighting Association’s (GOGLA) first ever standardised impact metrics so every off-grid company can report on their own impact.

Impacts can be measured easily at the national level because our goal is to catalyse national markets in solar lighting. We define a market as being catalysed at the point where 10% of kerosene lamps have been replaced by solar lights. We have done this twice, the first two times it has been achieved in Africa: in Kenya and Tanzania. Industry peers agree with us that we did the catalysing, or the lion’s share of it.

SolarAid’s SunnyMoney nonprofit business model acts as a market primer for companies like ours. SunnyMoney makes it easier for us to extend our operations into rural areas where they have a presence.
Erica Mackey, COO Off-Grid Electric, Tanzania’s leading solar-as-a-service company

Our sales took off exponentially between 2013 and 2015, with 1.2 million solar light sales. Only 20 million branded solar lights had been sold anywhere in the world by mid 2015.

The work of SunnyMoney in the Lake Zone has been transformational in putting kerosene lanterns on the pathway to extinction.
Josh Sebastian, Tanzania Program Manager, SNV Netherlands Development Organisation

The sobering thought, however, is that more than 50 African solar lighting markets remain to be catalysed. We are currently only operating in three: Malawi, Uganda and Zambia.

We can monitor the cost of delivering solar lights to our resellers in Africa because our finance personnel have been brilliant at their jobs for more than a decade now, and because good accounting makes it quite easy to sum the true costs of selling each year. It is then even easier to divide by the number of lights sold to arrive at the cost of transporting and distributing a solar light in Africa.

The chart below shows how we have fared over time. 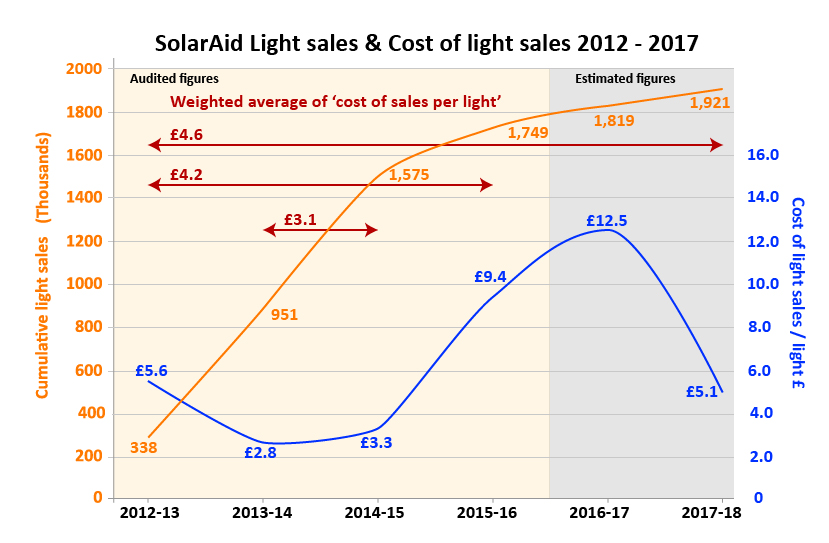 Historically we have based our £3 cost-per-light proposition to funders on our annual budgets and sales projections. Had we hit those in 2015-16 and 2017-18, we would have been very close to the £3 we actually achieved in 2013-15. But we didn’t. We were finding it harder in all our target countries, Malawi, Uganda and Zambia, due to droughts, hyper-inflation and the difficulties of operating on a commercial basis in poorer countries.

Accordingly, we have had to reconsider. We now know it is better to base our costs on real, audited, historical figures than on our budgetary aspirations. We hope our supporters, and potential supporters, will agree with our methodology.

One question we have been asked is why we would then not base our operational costs on last year’s accounts, so as to be as current as possible? Our thinking here is that a longer period of operation is more representative. Last year, when we had a cost of sales per light sold of a horrid £12.50, circumstances were exceptional. We were undergoing a fundamental organisational restructuring as we retrenched from the catalysed markets into our current target markets. Closing country offices and going through the sad process of laying off staff is expensive work. But now we have done that, and we hope our ship is stable. We are embarking on an exciting year, and have high hopes for the SM100, co-developed with Yingli: the most affordable solar light currently on sale in Africa.

We will be reviewing our operational costs at the end of each financial year from now on.