At SolarAid our main focus is on getting solar lights to people in rural Africa, where there is no electricity. But people in African cities often suffer from similar frustrations because the African electricity grid is notoriously unreliable and, even in capital cities, daily rolling blackouts are a common occurrence.

This week we heard from one of our amazing SolarAid advocates, Keith Neal, who told us a story about how he introduced our solar lights to a pensioner now living in Scotland, who went on to sell several more herself! Unlike her neighbours, Ann felt totally prepared when a power cut plunged her home into darkness:

“Two or three years ago I gave a talk on SolarAid to the Manchester and North Cheshire Circle of the Newman Association and as a result a number of solar lights were sold. One lady, Ann, was particularly enthusiastic. A few months ago she moved to Scotland to live in residential accommodation nearer to family. She always keeps a solar light on a windowsill. Late last year there was a power-cut. Many neighbours became interested in purchasing a solar light as a precaution against any future power cuts, so Ann phoned me for more information and I sent her an SM100. After demonstrating it to her neighbours several of them went on to buy their own lights, offering to pay £12 rather than £10, with the balance going as additional donations to Africa.” 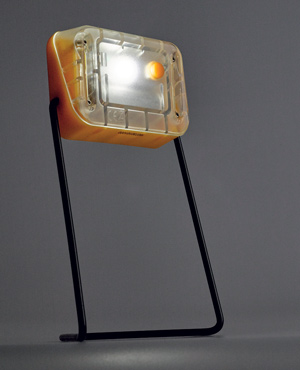 The SM100 solar light – the perfect back up light for power cuts.

We don’t often think about solar light providing security here in the UK, but when the lights go out here it just the same as the lights going out in Africa – although probably more shocking since we’re so accustomed to constant power.

If you’d like to equip your, or a family member’s, house with a solar light which will always be ready to provide light if ever there is a power cut, we’d love to help – you can buy solar lights directly in our shop. Your purchase will also help an African family to get safe, renewable light too. On average, families in Africa who switch to solar light tell another 15 people about their purchase, so your purchase could set off a virtuous spiral of positive impact.

As ever, we are extremely grateful to Keith, and all our supporters, for helping spread the light!