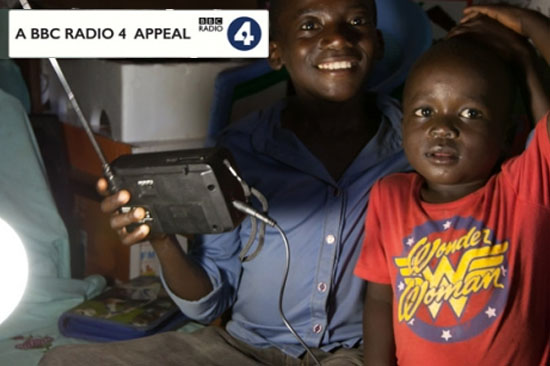 On 27 December 2012 Keith Neal received an email from a friend urging him to listen to BBC Radio 4’s New Year Appeal for SolarAid. It said, ‘I hope you don’t mind me forwarding this charity appeal to you. I think this is such a simple and effective way to improve the lives of poor people in Africa.’

Here he explains what happened next…

When I listened to Ian McEwan’s two-minute appeal I needed no persuasion. Having stayed in African homes without electricity the case for SolarAid was totally convincing. But I hadn’t realised that portable solar lights were available at a cost that was not beyond the reach of many poor African families. I immediately sent a donation, then considered what else I could do.

On New Year’s Day 2013 I logged on to SolarAid’s website and found a blog written by Steve Andrews, the CEO of SolarAid and SunnyMoney, entitled ‘Is a bee-hag the most powerful management tool ever?’ Phew! What he wrote was inspirational! Bee-hag, or BHAG, is short for ‘big, hairy, audacious goal’. For SolarAid this meant nothing less than the elimination of the kerosene lamp from Africa by 2020 – a mind-boggling goal!

The following day, I emailed Joseph Karanja, a long-standing friend from Kenya. The last sentence read: ‘I know that you must be up to your eyes with the Elections in March, but in a strange way the idea of selling solar lights at an affordable price to every family that needs one, goes way beyond politics and tribal divisions and opens up opportunities for all.’

Joseph replied immediately: ‘What a coincidence, my mother and I are discussing how we can help 22 families whom we have identified and have bright kids but are unable to do their homework for lack of light. We are at this very moment talking of the said solar lamps. We are thinking of how to get 22 solar lamps to these poor families.’ In a matter of days, Joseph bought lamps from SunnyMoney in Nairobi and the lives of these poverty-stricken families were transformed.

This proved to be just a beginning. Joseph’s blogs on this website go on to describe his use of solar lights in small-scale community development and in a major ‘Solar for Peace’ project. Through his deep understanding of local culture, Joseph has creatively transformed solar lights into tools for peace-building. This approach has attracted widespread interest and support as the project is having success in tackling violence and insecurity, and allowing land restoration in strategic areas in Kenya.

As a member of a church group in the UK concerned with home and overseas missions, I shared my enthusiasm for SolarAid’s BHAG and what £5 could do to transform a child’s life. SolarAid duly became the focus for our Harvest Project in 2013, with fund-raising over an 8-week period. The idea of ‘harvesting light’ went down well. The vicar astounded us by suggesting that we should go for a target of 1,000 lights and then she disappeared on a three-month sabbatical! I bought a stock of SunKing S2 lights and some were switched on in church every Sunday as part of the Harvest Project display. Over 50 were sold to parishioners and used in homes, garages and cars or as innovative Christmas presents. One person found his light very convenient when he went fishing at night! 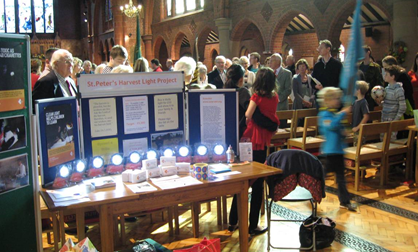 Such was the interest generated by the project that £5,240 was raised. SunnyMoney, SolarAid’s social enterprise, used the funds to provide a demonstration light to over 1,000 Head Teachers in Kenya, resulting in thousands of lights being bought by their pupils.

It has been amazing that through these and other initiatives over the last three years, thousands of people have been able to access clean light for the first time. Through SolarAid, it’s been possible for me and many others who have given their support, to have an immediate and tangible impact on the lives of people living without access to electricity. Energy access and poverty reduction go hand in hand and I’ve enjoyed being a part of a solution that changes people’s lives in such dramatic ways.

I’m very thankful to my friend for sharing SolarAid’s last Radio 4 appeal with me. If this had not happened, I would not have had the opportunity to work with Joseph and to help so many poverty-stricken families. I’m going to be sharing the latest radio appeal with lots of friends and neighbours.

Can you do the same? Like me, you never know who is waiting to hear about SolarAid.