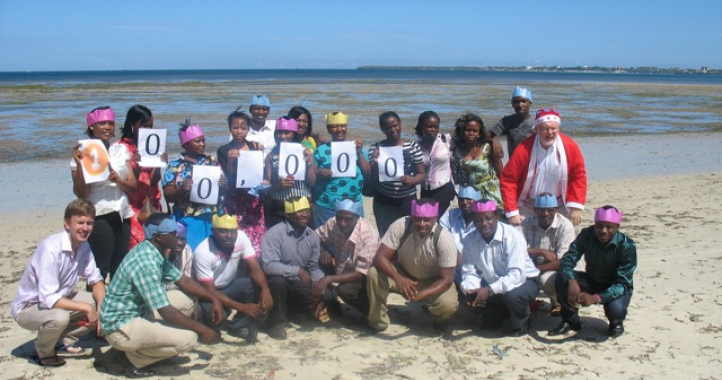 We would like to say a huge thank you to our Field Teams who’ve been campaigning tirelessly in Morogoro, Iringa & Njombe. It was good to see them all arrive back after their long time away, and our very own Santa Claus (Operations Director, Malcolm Wigmore) ready to celebrate.

“Castory told us that at home his family spends a maximum of two hours at night using a kerosene light before they turn it off to save money. He stated that the d.light S1 study light will enable his family to have safe and reliable light so that he can start studying at home during the evening.”

Thanks to the hard work of the SunnyMoney team, thousands of Tanzanian children can expect a solar light in their stockings this year! As you can see from the photo, the Christmas climate is a little different to the UK, meanwhile the SunnyMoney success story remains in full swing!

Listen to international best-selling author, Ian McEwan, ‘talk SolarAid’ on 30 December at 7.55am and 9.25pm on Radio 4.