During a recent visit to Malawi, I travelled with our team to the district of Salima, a few hours outside of Lilongwe, to see how our team is working to introduce rural communities to solar power and lighting.

On a Saturday morning, we met up with local school teacher, to deliver a new batch of solar lights. As we met, there was a knock on the door and a young boy appeared, who then waited outside while we finished our meeting.

A few minutes later, I started to chat with the boy, a form 4 student who’s name is Raphael. He told me he was there to get a solar light. It turned out, he’d been walking for two hours that morning from his home for this. I asked him why he wanted the light…’Exams’ he said. ‘I want to revise for my exams.’

I wished him good luck and we then set off to Nkotakhota to meet a young man who was interested in becoming a SunnyMoney agent. 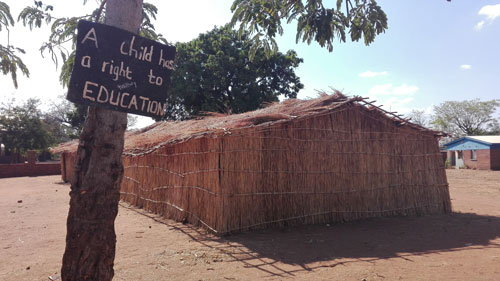 As we left, I took this picture of his classroom, made entirely of thatch, which the teacher explained had been built by the community to increase the school’s capacity. Look at that sign – simple, powerful words:

On the road to Nkotakhota, I thought about how we are often asked to prove the link between solar lighting and education. I then thought about Raphael. For him, it’s not rocket science. He was willing to walk a four hour round trip for a solar study light, to give himself the chance to study more each evening.