In the central district of Kasungu, Malawi, there is a busy market where people gather after work to buy their essentials. The only problem – there is no electricity in many parts of the market. This costs sellers hours of business and lost income as the market becomes busier as the evening goes on. 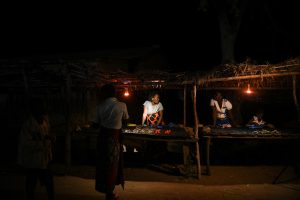 At one of the unelectrified stalls, Margaret John sells fish and tomatoes. For Margaret, business was tough. When she could afford it, she used to use a battery powered torch that gave off poor light and was costly, as it often needed new batteries.

“The other problem that came with using torches at night is that sometimes they could malfunction in the middle of business and I remember giving more money as change to customers because I couldn’t see properly enough to distinguish bank notes. I lost quite a bit of money.”

Margaret is now using a solar light. She is able to work late, and doesn’t have to spend money on batteries anymore. She is able to keep her stall open later creating more opportunity to sell her goods. 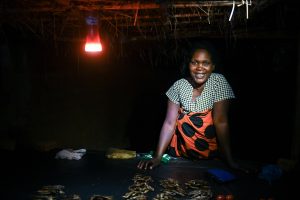 Margaret Michael is seen smiling while waiting for customers at Mandebvu Market in Kasungu district, central Malawi on Friday 30 April 2021.

“With a solar light, I am able to trade more hours at night which is good for my business. Before I started renting lights, I used to close my business as early as 5:30 pm” said Margaret.

She also takes the light home at night giving her children the opportunity to study.

For Margaret, a solar light means opportunity for herself and her children.