The Zambia drought: The different faces of climate change, part 3

This is a series of three blogs on the drought in Zambia. 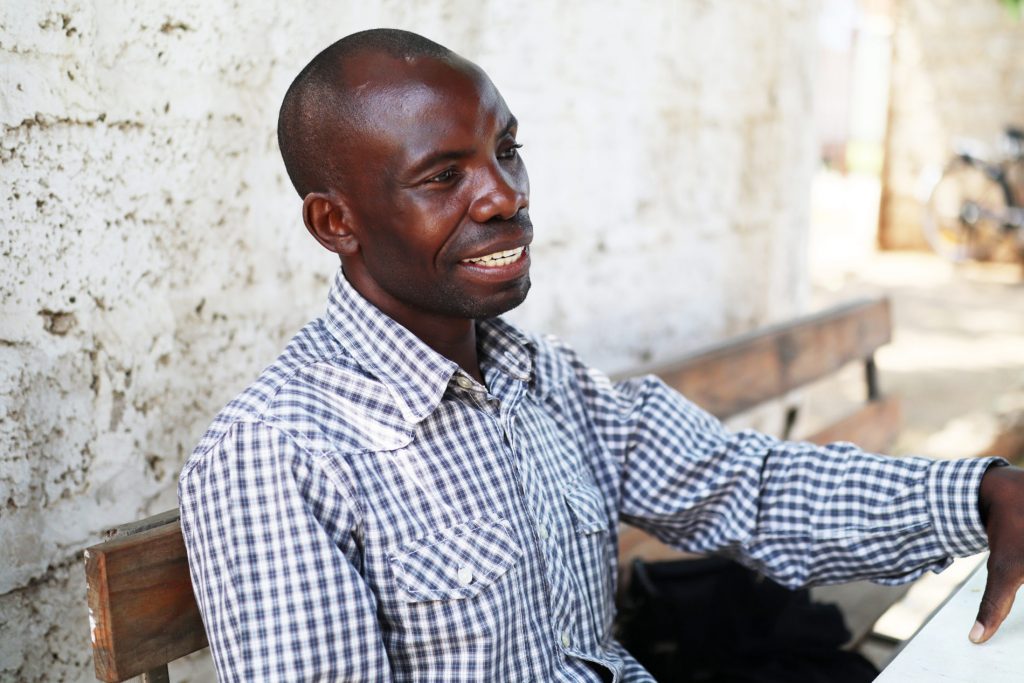 Winter Makala is a teacher at Simuawa Primary School in Southern Zambia. He is also a SunnyMoney agent, working to get solar lights out to rural communities. He is passionate about his job, but his dream is to own his own farm in the future.

Winter is cheerful, he jokes a lot and talks about how to plant citrus trees, and that the winter is his favourite season, because that is when he was born, and therefore how he got his name. It’s when he talks about the drought, that his face turns serious, ‘This drought that we are experiencing this year is the worst one from when I was born. The drought has affected us tremendously. Wherever you go, you will find out, they have no food. They are crying every now and then. So, it is really sad, people are struggling to get food. If I can remember well, it’s just rained three times from the time it started last year. So we find that most of the crops that we’ve planted has dried out. So people lost a lot of farm input. Even this time, I don’t know how they are going to plan their crops, because they have no money’

The lack of income for people living in South Zambia is affecting Winter’s job as a solar light agent. With the little money that people have, they need to buy food. To get light, sometimes they trade some maize they’ve got left for that day, to borrow a solar light in the evening.

Winter sees a clear connection between climate change and the severe drought in Zambia. Now the school are doing what they can by bringing the subject of climate change into the curriculum. 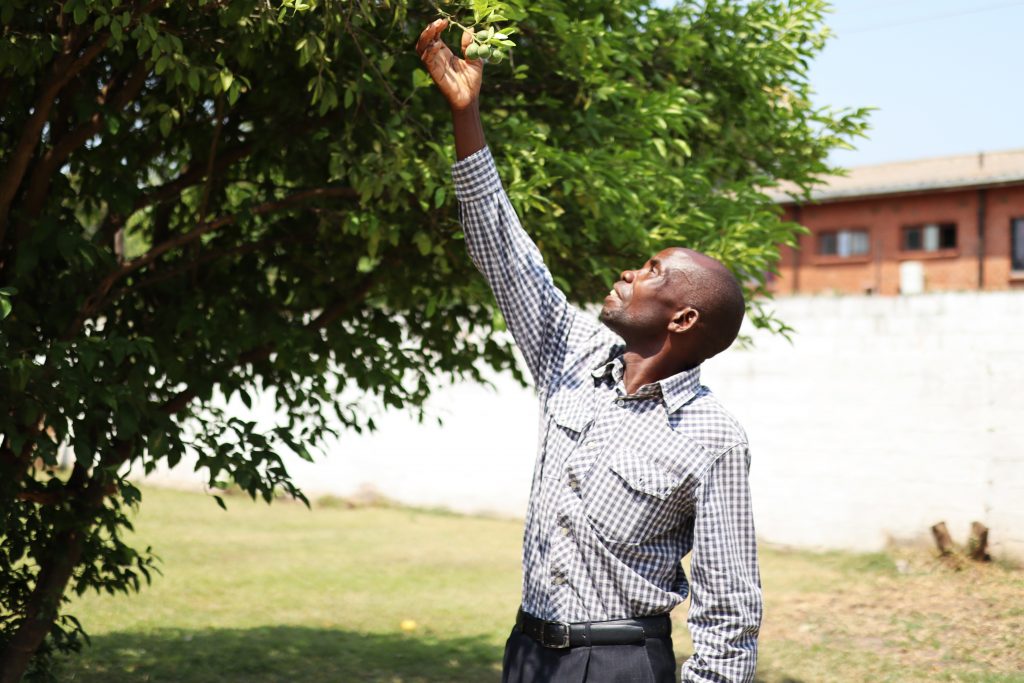 ‘Sometimes I find that the students compose poems on climate change, we also tell them to plant trees, so maybe in the near future, it will have good benefit to our nation. But, also to bring rainfall and encourage them not to cut down trees anyhow, because it can create a desert. So they learn about a lot of things in school, they are very much aware.’ However, as a result of the lack of food, as well as, lack of money to pay tuition fees, Winter has noticed that some students have now started to drop out of the school where he works as a teacher.

One hour in a car on a difficult dirt road straight out in rural Zambia takes you to Nyakantaingi Primary School where Ms. Michelo works as a head teacher. The nearest area to buy food is a one day walk from the village. The villagers normally grow their own food, but the land is dried out. Many trees appear to have burned down. 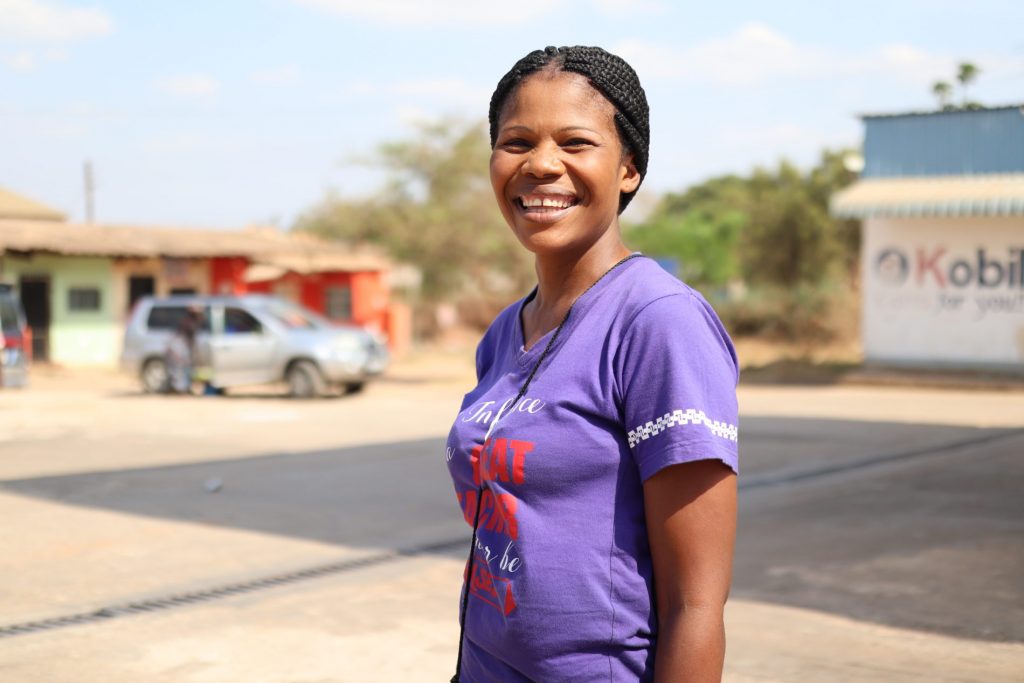 Ms Michelo confirms what Winter has expressed, ‘The droughts issue has been ongoing, I think for the past 5-7 years. So that has impacted performance of the learners, because when food is short, they often do not come to school. When we talk to parents and ask why, they explain that “we are only able to find just a little for the day so it’s not easy to share, to keep for someone who is not home. So the little that we find for that particular day, it’s best everyone has a share at the same time, we eat together”. So that’s why pupils do not walk over to the school. Because the minute one leaves home, that’s it.’

Many parts of central and southern Africa have now recorded their lowest rainfall since 1981. The disastrous consequences of climate change, and more specifically, the phenomenon El Niño on rural Zambia is reported by several development institutions, and FAO released a report specifically on the subject in February this year.

Much of rural Zambia relies on regular rains in order to feed the population. When the rains fail, life becomes increasingly difficult. Families who have already bought a solar light, can at least light their homes during these times. Others, who rely on candles, will prioritise food to feed their families, rather than spend money lighting their home. 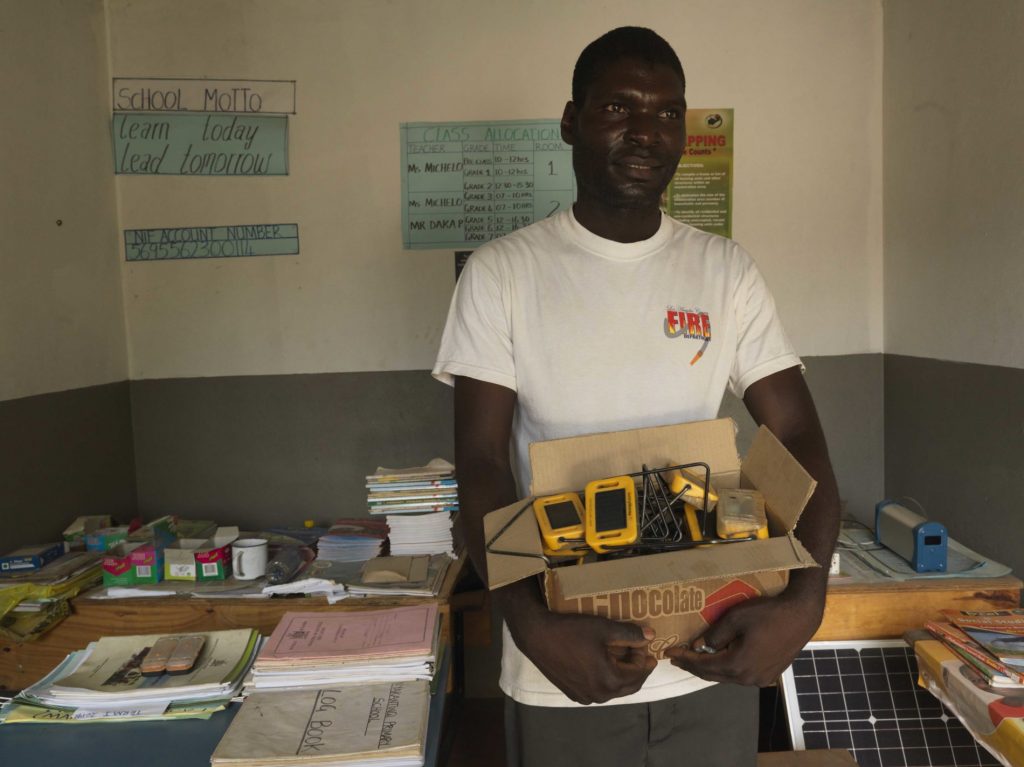 Patrick Daka, a teacher at Nyakantingi Primary School holds a box of SolarAid lamps ready to be distributed to the children so they can complete their homework after dark.

These are populations solar markets struggle to serve. That is why, at SolarAid, in addition to building solar markets, we are continuing to look at innovative ways to ensure everyone can access basic lighting and electricity, no matter who they are or where they live. We call this ‘the gap.’ The gap between those who the market can reach and those it fails to serve. We need to keep innovating in order to bridge this gap and ensure that, by 2030, no one is left in the dark.

Our Light Library projects are part of this effort, helping students and their families borrow lights from the local school light library, rather than having to find money to buy one outright. Basic lighting is vital if students are to have an opportunity to study in the evening, improve their education and help break the cycle of poverty. One of our Light Libraries has now been set up at Ms Michelo’s school, Nyakantaingi Primary School. You can learn more about this project and how to support here.