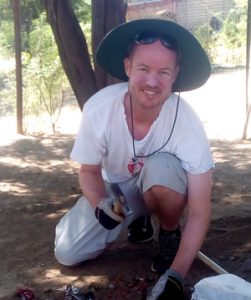 Last year in December John Landon bought a box of 24 SM100 lamps from SolarAid to take to Namibia in southwest Africa where roughly 25% of the 2.5 million population live in slums.

“I arrived in Namibia a few days ago. I’m here until mid March. 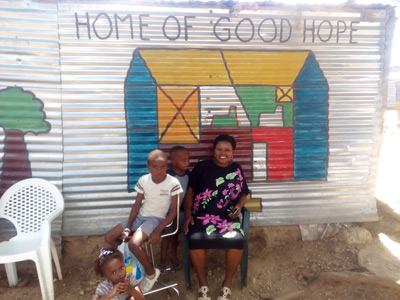 Today, I took the lamps to Monica,  the lady who runs the charity, ‘Home Of Good Hope‘. The charity feeds around 600 children each day in the slum area outside of the capital city, Windhoek, as well as helping run football games, and assisting people that need clothing. The slum area outside Windhoek is a huge place with metal sheds as people’s homes. Lots of poverty.  One of the staff here said that each year he identifies people who are worse off than others. And he and whoever can help, build new homes (metal sheds) for these people. So I will help with that.

Tomorrow I will be going to another charity in another part of the slums. In addition to providing education to kids, they provide basketball training and games. 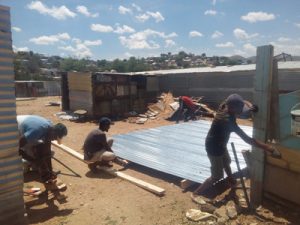 The plan is to give solar lamps to each of the families. Then the other lamps will be given out to families in need.

Today we built a home/shack for a family of 11. Only the father brings in a small income by selling salt around town. They have to ask neighbours for food sometimes. They had two shacks before today. But one of the older sons slept outside on a grubby old mattress under a tree. So any time it rained, he would get wet. I believe they have only used candles for some light. 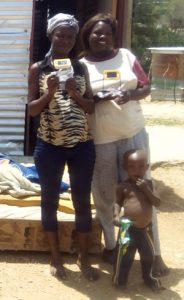 Finished day two. We built a shack for a Grandmother, her daughter and the daughter’s two small kids. Some other guys appeared and rescued a kitten and chicken both with broken legs and a driver transported them and myself home. The family was very grateful for the two lamps, they had been using candles in evenings.

There are two German men who have been funding this project. They were interested in the solar lights and asked for the link to SolarAid’s website. 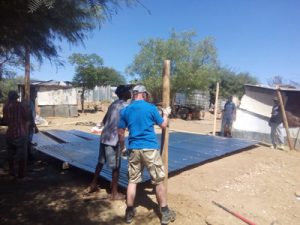 Completed the 3rd and final shack today. There are possibly other shacks getting built during the next two and a half weeks I’m still here in Namibia. But I’m not sure if I will be volunteering elsewhere, or on a tour.

Today, the shack was built for 2 sisters. One is pregnant and due this month. Her sister has one small boy. The mother is HIV positive. Neither of the sisters work. I think they have used candles at night. They were very happy to receive the lamps. 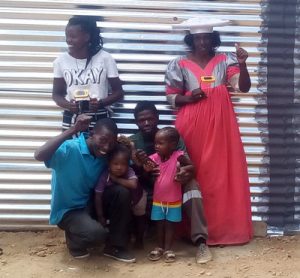 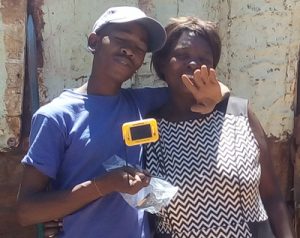 I asked again how people get food. The Government apparently pays a tiny sum to people with kids. But it is only around 250 Namibian dollars a month. Which is like 15 British pounds. I will be heading back to the soup kitchen section of the charity either next week or the week after.

The workers helping build today were interested in having solar lights too. They are popular with everyone who sees them.

Many thanks go out to John, for all his work and for choosing to support SolarAid and to distribute solar lights in Namibia where people so clearly need help. We’re looking forward to meeting John and hearing more about how the story evolves when he returns to Namibia… this is not the end  – if you would like to support John in his work anything you can contribute will make a real impact.